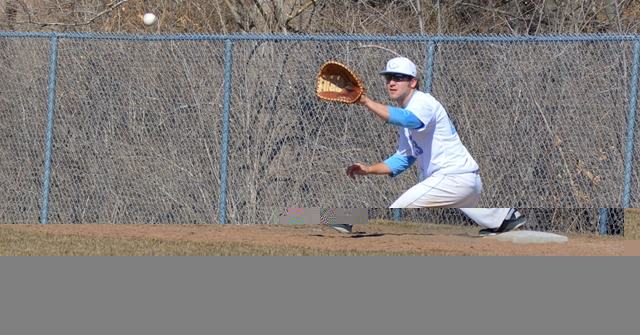 The Westminster baseball team battled it out on the field with the number two team in the nation Thursday night. The Westminster Blue Jays took Webster into the 19th inning before ultimately falling 2-1. The Blue Jays fall to 14-10 in conference play while Webster continues their perfect 23-0 conference record.

After 13 scoreless innings, the Webster Gorloks finally put a run on the board. The Blue Jays threw out a runner at home to keep the Gorloks from scoring again, bringing the game into the bottom of the 13th with the Blue Jays needing to score.

Junior Tyler Branneky led-off the inning with a walk. Senior Danton Hughes was up next and cracked a double to left field to score Ty. Branneky and score the game. Da. Hughes advanced to third on a wild pitch and senior Jordan Allen was walked to have two runners on with sophomore Jacob Holtgraewe up to bat. . Holtgraewe hit a single to second, bringing bases loaded. Da. Hughes attempted to advance home on a wild pitch, but was thrown out.  The Blue Jays were unable to score again in the inning, sending the game into the 14th inning.

The Blue Jays left a runner stranded on third twice, and in the top of the 19th inning, Webster scored on a sacrifice fly to take a 2-1 lead. It was do or die for the Blue Jays. With two runners on and two outs, the Blue Jays hit a line drive to left field to bring the four hour game to an end. The game is believed to be the longest game in school history.

Sophomore Collin Brinker was credited with the loss after closing out the game. He pitched four innings and struck out four. Junior Tommy Bohnert pitched the first nine innings, allowing only three hits. Freshman Miller Bowles pitched six innings, struck out three and allowed one run.

Freshman Nolan Bax went 2-2 from the plate, while Holtgraewe went 2-4. Junior Tim Chambliss had 12 putouts in the game.

The Blue Jays close out their regular season with a three-game series against Spalding University over the weekend. The nine inning game will be Friday, May 2 at 6:00 p.m. The doubleheader will be Saturday at 1:00 and 3:00 p.m. The four Blue Jay seniors will be honored in between the two games on Saturday. The games will be streamed live here: http://www.bbsnonline.com/.