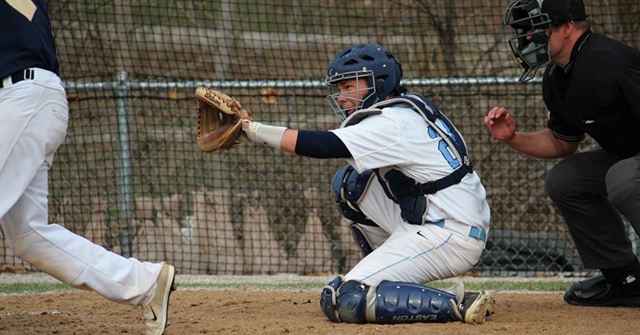 Principia scored in the first inning of game one on Saturday. The Blue Jays were unable to get on the board until the third inning. Chambliss led-off for the Blue Jays and was hit by a pitch. He stole second and advanced to third on De. Hughes’ ground out. Junior Tyler Branneky then hit a RBI single to score Chambliss and tie the game at 1.

The Blue Jays had a strong fifth inning to take the game lead. Junior Cameron Backes led-off for the Blue Jays and was walked. He stole second and advanced to third on Chambliss’ ground out. Ty. Branneky hit a RBI single to score Backes, and senior Danton Hughes singled to move Ty. Branneky to third. A balk brought in Ty. Branneky and moved Da. Hughes to second. Freshman Tyler Picha hit a RBI double to score Da. Hughes, and Picha later scored on a passed ball.

Senior Andy Pichler led-off in the bottom of the sixth for the Blue Jays. He was walked, stole second and was brought to third on a balk. He then scored on a passed ball, bringing the Blue Jays’ lead to 6-1. Sophomore Ryan Loethen and Chambliss were both walked, and De. Hughes stepped up to the plate and cracked a 2 RBI triple to right field, scoring Loethen and Chambliss. Ty. Branneky then singled, and De. Hughes scored on an error by the third baseman. The Blue Jays were unable to score again, leaving their lead at 9-1 heading into the seventh.

Freshman Miller Bowles came in as relief and struck out three to end the game with the 9-1 win.

De. Hughes (6-0) was credited with the win. He pitched six innings, allowed only one run and struck out nine. Ty. Branneky went 3-3 from the plate with two RBI. Picha went 2-2 with two doubles.

In the final game of the series, Principia took a 1-0 lead in the second. In the bottom of the second, Picha reached on an error to start the inning. Loethen then hit his first collegiate homerun to score himself and Picha. Pichler then singled, stole second and advanced to third on an error. Backes grounded out to second, but scored Pichler to bring the Blue Jays’ lead to 3-1.

Backes led-off the fifth inning with a single, and Chambliss followed with a two RBI homerun. Principia added another run in the sixth, but the Blue Jays answered back with a run of their own in the bottom. Loethen singled and was brought in by Pichler’s RBI single to bring the lead to 6-2.

In the bottom of the eighth, the Blue Jays grabbed three security runs.  Freshman Nolan Bax and Pichler scored on wild pitches, and Backes was brought in by Chambliss’ RBI single.

Principia led-off the top of the ninth with a double. They had two on base, but the Blue Jays struck out two, leaving two stranded on base. The Blue Jays pulled out the 9-2 win to take the three-game conference sweep.

Junior Jake Rule (2-2) was credited as the winning pitcher after pitching six innings, allowing two earned runs and striking out six. Loethen, Chambliss and Pichler all went 3-4 from the plate. Chambliss finished with three RBI and Loethen had two RBI.