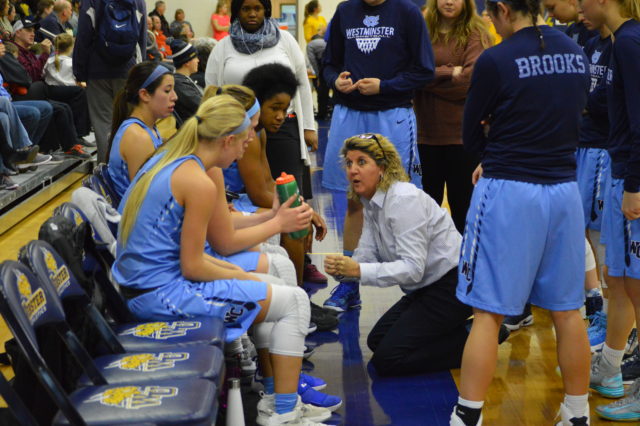 Tracey Braden served as the women’s basketball coach at Westminster from 2007-2017, including stepping into the role of Athletics Director in 2016.

“I am so humbled and honored in being inducted into the Westminster College Athletics Hall of Fame!  Westminster holds so many incredible memories for me and in many ways, helped shape who I am as a coach,” said Braden. “The players, staff, and faculty truly made my time there so rewarding.”

Braden is the winningest coach in women’s basketball history at Westminster, amassing a record of 155-100 through her 10 seasons, including seven out of those 10 being winning seasons. The squad’s 22 wins in the 2011-12 season remains a program-high for wins in a season.

Braden earned four SLIAC Coach of the Year awards in her 10 years as a Blue Jay beginning in the 2008-09 season after the squad posted the highest number of conference wins in program history. She then earned the award after the 2010-11, 2012-13, and 2015-16 seasons.

“Legendary coach, Pat Summitt said, ‘you win with people’ and for me, this is exactly how I feel about Westminster!  We won because of the people connected with our program, starting with the student-athletes!,” said Braden.

Braden is now the Head Women’s Basketball Coach and Senior Woman Administrator at University of the South in Sewanee, Tennessee.