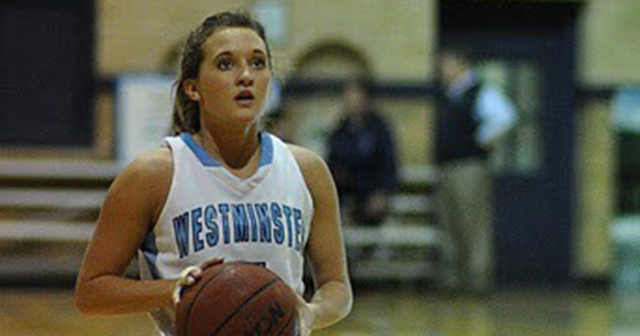 Rachel Backes (’12, KKG), is one of three women’s basketball inductees this year. In May 2017, Backes was inducted into the St. Louis Intercollegiate Athletic Hall of Fame and is just one of 10 honorees from Westminster.

Backes found a spot on the SLIAC All-Conference team during all four years, including First Team honors her sophomore, junior, and senior seasons. At the end of her junior year, she was named the SLIAC Player of the Year.

As a student, Backes was equally successful. She graduated with a degree in biology with a near-perfect GPA, and was a member for Chi Alpha Sigma, the National Athlete Honor Society. She was a SLIAC Academic All-Conference Selection for three years, and was named to the CoSIDA Academic All-District team twice, earning Second Team Honors as a junior and First Team honors as a senior. Backes also earned a spot on the Capital One Academic All-District VII Second Team in 2011 as a junior. She was part of teams that earned 24th in the WBCA Academic Honor Roll in 2009-10 and 13th in 2011-12.

“From practice to class to labs to games, my time at Westminster passed by way too quick, but it’s marked itself as one of the best times of my life,” said Backes. “It’s a time I find myself reminiscing about almost daily.  I’d give anything to go back for another day.  I had opportunities given to me at Westminster that I’m confident wouldn’t have been the same anywhere else.”

Backes remains at the top of several statistical categories, including fourth in assists with 295, fourth in steals with 210, fourth in field goals made with 437, and fifth in points with 1,203.

“Although it’s hard to choose just one, it is easy to say that Coach Braden was my most influential person at Westminster and a person that has played one of the biggest roles in my life,” said Backes. “Coach Braden recognized potential in me before I saw it in myself.  She pushed me to be a leader by example, she encouraged my passion, and she instilled a type of combined confidence and humility in me that I am forever grateful for.”

After graduation, Backes worked as a Delivery Consultant on the Physician Track at Cerner in Kansas City from 2012-13. After receiving her Master’s in Education from the University of Missouri in 2014 with a 4.0 GPA and serving as a student teacher at Rock Bridge High School, she now teaches biology at Lee’s Summit High School in Kansas City and is an assistant girls’ basketball coach.