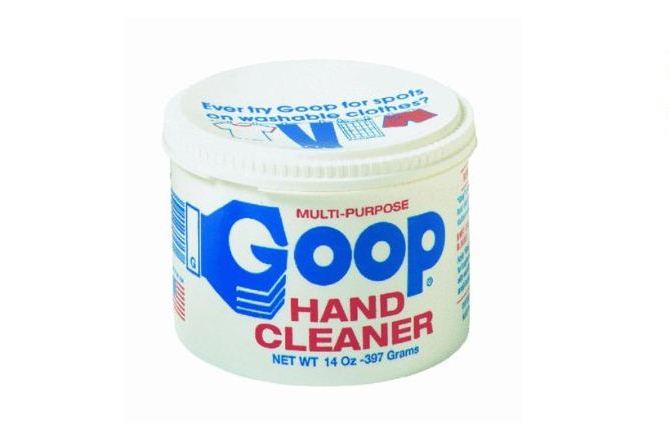 Thanks to James F. Muench, Class of 1986, for contributing this story. 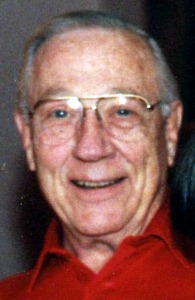 Charlie Muench ’48, engineer and inventor of Goop hand cleaner and other products, fell prey to unscrupulous business practices, according to Jim Muench ’86.

COLUMBIA, Mo. – A young chemist develops a useful product that people want.  The product sells, and his company rakes in profits.  That’s the American Dream that Charlie Muench was living – until it was taken from him.

A year after graduating in 1948 as an organic chemistry major from Westminster College in Fulton, Mo., Charles A. Muench and his mechanic brother were working on cars in their garage in University City, a suburb of St. Louis.

To clean the grease from their hands, his brother handed him a can of waterless hand cleaner — probably petroleum based — which he’d never used before.  But the cleaner couldn’t be washed off with water.

That got Charlie Muench thinking, according to a 1985 article in the St. Louis Globe-Democrat.  The next day, in his basement, Muench started working on a cleaner that could be rinsed off, and he eventually came up with what would later be named Goop.

Muench’s wife, JoAnn, gets the credit for the name.  At a naming party one evening, the partners and other interested people brainstormed all sorts of names such as Grime Go and Grease Off, according to the Globe-Democrat article.  After they had pondered and prodded the list for a lengthy time, JoAnn Muench reportedly said, “I’m going to bed.  It just looks like Goop to me.”  When a trademark attorney saw the name on the list, he said, “There’s your name,” and the rest was history.

According to a 2005 article in the St. Louis Business Journal, at the time he invented Goop, Muench was working as a research chemist with Lambert Pharmaceutical Co., the manufacturer of Listerine mouthwash that is now part of Johnson and Johnson.

In 1951, he started Muench Laboratories Inc. and asked his high school friend, John Critzas, to join him as sales manager.  The Globe-Democrat article quotes Muench as saying the product didn’t reach its current form until 1953.

Over the next decade or so, the friendship between Muench and Critzas waned, and the partnership ended in the mid-1960s.  According to the St. Louis Business Journal article, the majority of the shares in Muench Laboratories were split evenly between Muench and Critzas, with a remaining 20 shares owned by Jim Edwards, a doctor in Oklahoma who was Critzas’ Washington University fraternity brother.  Edwards had served as the best man at Critzas’ wedding and served in the army with him as a fellow World War II draftee.

Muench offered to buy Edwards’ shares, valued at about $500 for $2,000, but Edwards sold instead to Critzas for $2,500.  Critzas purchased the rest of the company from Muench in 1966 and changed the name to Critzas Industries.

Muench found himself out of his company and out in the cold.  Melissa Muench Mitchell said she found him in his office one day in the early to mid-1960s when she was 8 or 9 years old.  He had just lost his business, and he looked troubled.

“I remember very clearly that things were going terribly wrong for my dad’s business,” she said.  “I remember asking him when I was rubbing his back one night because he had such back trouble, and he said, ‘Tickerbones, you’re too young to understand.’

Mitchell said her father felt anger toward Critzas after the takeover.  “For years, Critzas was a name that was not mentioned in our house,” she said.  “For years, Goop was never brought in the house.”

Then in the early 1970s, Muench got involved in stock car racing and started using Goop again.  “He knew it worked; he invented it!” she said.

“It was a very dark period in my dad’s life to lose his business like that,” she said.  “He, for a long time, felt cheated and really struggled to get past that.”

The Critzas family holds a different viewpoint on the takeover of what is now Critzas Industries Inc.  According to Diana Critzas Tate, vice president of Critzas Industries, her grandfather, Evangelos John Critzas, had funded the business to keep it going.  She said her father, John Critzas, had grown impatient with his friend because Muench wanted to focus on packaging and not marketing the Goop product.

Charlie was more into the packaging side of furthering the business,” Tate said.  “They were packaging products for companies.  They would put the parmesan cheese in little packages for Steak and Shake, and they packaged pills for veterinarians.”

Tate shared an article reprinted from the St. Louis Chamber of Commerce Magazine, undated but probably from the early 1950s, that highlighted Muench Laboratories’ efforts in packaging rather than Goop sales.

Tate said she had never heard of anything negative that had occurred between Muench and Critzas.  “Charlie didn’t have the funds, and, from what my dad said, he didn’t have the desire,” she said.  “He didn’t think the product was something he wanted to work at promoting.  He wasn’t that interested in it.  Even though he created it, he wasn’t as passionate about it as he was at other things.”

Mitchell disagrees with that assessment.  “For a long time, Goop was in his veins,” she said.  “I can remember being four or five years old, and my mom and dad would get us all hauled in front of the TV at, say, 6:30 in the morning on a Thursday because he bought a commercial, and he was on TV, and he was selling his Goop.”

Goop’s sales are going strong and now at about $10 million a year, Tate said.  In addition to cleaning hands, there are now Goop products that remove stains and clean animals, especially cats and dogs.

“People who breed Himalayans and Persian cats, they have to get them really fluffy and clean before their shows, and they’ve been using Goop for probably 30 years,” she said.
As for Muench, his business problems did not end with the loss of Muench Laboratories.  He later purchased an aluminum foundry, Forecast Inc., Mitchell said.  Diversified Industries then took an interest in the Kirkwood, Mo., company, purchased its stock in December 1969 and made Muench chairman of its board.

The foundry led by Muench had embarked on projects developing several new products.  For instance, Muench and Allen Penniman designed a wheel adapter assembly, which was awarded U.S. Patent No. 3,459,455 on August 5, 1969.  The adapter, placed between a wheel hub and drum, enabled an automobile wheel hub to fit wheel drums of different stud circle designs.

Then Charlie designed and built a centrifugal casting system, which was a semi-automatic system capable of producing castings with extreme metal density, strength, fine finish and detailing at high production rates.  Muench’s system received U.S. Patent No. 3,651,858 on March 28, 1972.

However, by 1974, Diversified heavily manipulated its stock, Mitchell said.  The company was taken off the trading board – apparently during a leveraged buyout.  Muench was left holding hundreds of thousands of dollars of worthless shares, released as chairman of the board, and had his company taken away again, Mitchell said.

Muench would win the Alumni Award of Merit from Westminster College in 1971.  He was awarded several patents on various inventions.  “He died without ever getting his just due,” Mitchell said.  “It’s not that he was poor, but he was never comfortable financially.  All of the things he had put his energies into eventually became successes after he was forced out, but he just did not have good judgment of the business morals of individuals.”

Muench also owned a packaging company in Kirkwood, Mo., that made packets of aspirin, mustard, ketchup and salt and pepper, but that was after he had lost Muench Laboratories and Goop, Mitchell said.  In the late 1970s, after the Diversified debacle, Muench went to work for Looseleaf Metals, an engineering consulting firm that downsized and left him without a job.  He then went to work for Banquet Foods as its director of engineering, finding better ways to produce pot pies, inventing Wingettes and Drumettes and serving on the development team that created McDonald’s McChicken patty until the fast-food giant chose another supplier. ConAgra purchased Banquet in 1980 and later moved the company to Omaha.

In the late 1980s, Muench then took a job with Steritz Engineering, but another downsizing episode put him out of work again for a few years.  He found himself again working on another invention, which he designed, built and tested on his own: a sanitary liquid/solid separator to be used in food processing.  The machine separated crumbs and particles of breading material that had become suspended in frying oil.  His new invention was awarded U.S. Patent No. 5,277,109 on January 11, 1994.

In 1993 American Foods hired him as a consultant for the last three or four years of his life.  He died Jan. 19, 1996, at the age of 70, and his coworkers said at his wake that they were dismayed because they still had so much to learn from him, Mitchell said.

With a list of patents to his name, Mitchell said she believes her father was a great engineer who had trouble with management intrigues.  “He just didn’t have good business knack,” she said.  “He trusted the wrong people, and he got burned by it, again and again and again.”

But the inventor had become a teacher.  She said Muench worked closely with the two teenagers who lived across the street from him.  Mitchell said Charlie had the knack of mentoring without realizing he was doing so, and the Farrell boys were always over in his garage helping him rebuild his 1965 Mustang GT 4-speed, which they thought was the coolest car they had ever seen at the time.  He taught them how the engine was assembled, how it worked and how to take care of it.

According to Mitchell, both young men told Charlie they decided to major in engineering because of what they had learned spending time with him in the garage.