Outstanding Female Senior of the Year Presented to Lindsey Dennis 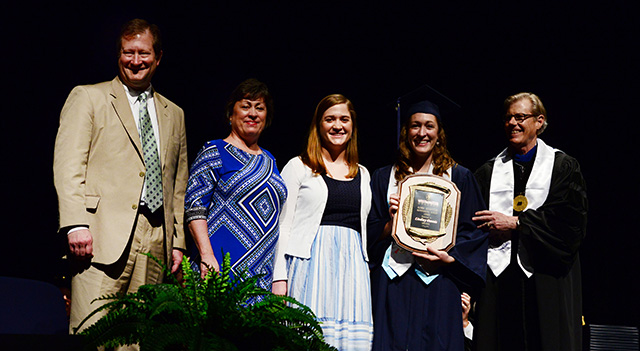 During commencement on Saturday, May 9, 2015, Alumni Council member Jamie Dillon Oestriech ’01 presented two Outstanding Senior Awards on behalf of the Alumni Association. Each year, an award is given to one male and one female from the graduating class.

The 2015 Outstanding Female Senior of the Year is Lindsey Dennis from Little Rock, AR.

An early childhood and elementary education major, Lindsey is a member of the Skulls of Seven, the Honor Commission, the Order of Omega Honor Society which represents the top five percent of Greek leaders on campus, and the education honor society Kappa Delta Pi.

She is the current President of the Student Ambassadors and was a member of the Blue Jays soccer team during her freshman and sophomore years. She has served in a number of leadership roles in her sorority, Kappa Kappa Gamma. In addition, she has served the College as a seminar mentor and through the Christian Leadership Council.

She will continue to serve Westminster for the next two years as the Young Trustee of the Westminster Board of Trustees. Most recently, she served the college as a student representative on the Presidential Search Advisory Committee.

Lindsey received her degree in Elementary Education. Her immediate post-grad plans are to move to Kansas City and pursue a teaching career.

In the photo above, Lindsey (second from right) stands with President Barney Forsythe (far right) and her family (left).