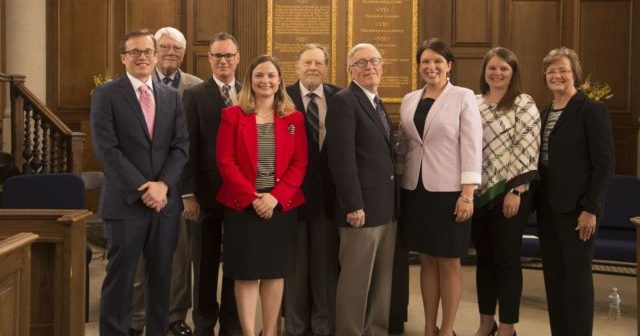 Five were given Alumni Achievement Awards for their distinguished personal and professional accomplishments and significant contributions to society. Those honorees included:

Two Young Alumni Achievement Awards were given to a married couple who have demonstrated outstanding achievement early in their careers. This award is given to those with remarkable achievements within five to fifteen years since graduation and provide dedicated leadership and service to their community. This year’s winners were married couple Adam W. Kloppe ’06 ΔΤΔ, who is Public Historian at the Missouri History Museum, and Kathryn L. Pilgram-Kloppe ’08 KAѲ, who is a Zoological Manager at the St. Louis Zoo.  The couple resides in Maplewood, MO.

The Jack Marshall Alumni Award, named for a 40-year beloved Westminster employee and given to an alumnus/alumnae who given significant time, talent, and treasure to Westminster and demonstrated exceptional loyalty, commitment, dedication, and service to the College was awarded to Anne McIntosh Schneider ’85 KAѲ, who is retired from the Missouri Attorney General’s office and lives in Jefferson City, MO.

The 2018 Remley Women’s Award presented an honoree who champions opportunities for women at Westminster was awarded by Dr. Audrey Remley herself, the first full-time woman professor at Westminster College. This year’s award went to Rev. Jamie Haskins, College Chaplain and Instructor of Religious Studies.

Kristen Leone Jackson ’06,  emcee for the event and President of the Alumni Council, said to the award winners: “Your accomplishments are many and varied, and your fellow alumni are indeed proud of you. Your Alumni Association thanks you for your presence here today and congratulates you on the pride and honor which you have brought us.”

The Golden Anniversary 50-year Class of 1968 was also recognized at the ceremony.