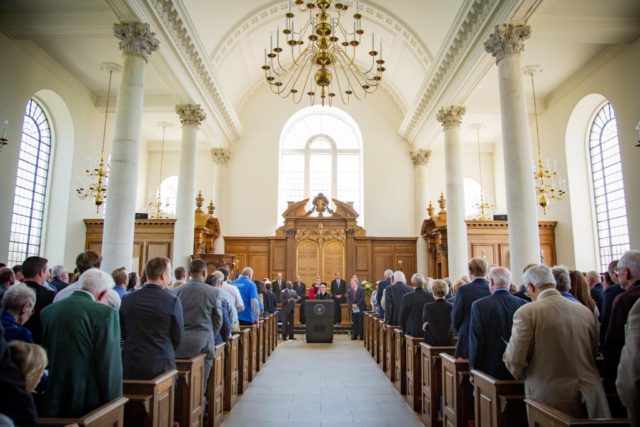 Nine Westminster College alumni have been selected to be honored for their significant accomplishments and contributions to society at the annual Alumni Achievement Award Convocation held at 10:30 a.m., on Saturday, April 29, during Alumni Weekend on the Westminster College campus in Fulton, MO.

Mike Reid ’68, a Phi Gamma Delta from Jefferson City, MO, is the 2017 recipient of the Jack Marshall Alumni Loyalty Award.

Reid is Associate Executive Director, Advocacy for the Missouri School Board Association and previously was Director of Compliance for the Missouri Ethics Commission.  As a part of his continued dedication to Westminster, he regularly hosts Mid-Missouri events for prospective students, families, donors and alumni; served as Alumni Association President; and has three daughters, Sarah, Anne and Emily, who attended Westminster.

Established in 2009 and renamed in 2012, the Jack Marshall Alumni Loyalty Award is bestowed upon alumni who demonstrate a continued interest in Westminster College through contributions of time, talent, influence and/or funds, and who have demonstrated exceptional loyalty, commitment and dedication to the College.

Daniels is an investor for Harborstone Group LLC and has worked as an investor in and operator of several private businesses and as a principal with Harborstone Group LLC. He has served as a Vice President and President of the Quincy School Board and has been a dedicated member of the Westminster Board of Trustees since 1991. Two of his children, Spencer and Lauren, are Westminster graduates.

Elrod is a partner in the law firm of Conner & Winters LLP and has focused his practice on litigation and dispute resolution.  In 1993, he became a fellow in the American College of Trial Lawyers and in 2014, was honored with the Richard S. Arnold Lifetime Achievement Award for Distinguished Service by the Eighth Circuit Court of Appeals Bar Association. He has been a member of the Westminster Board of Trustees since 2007.

Dr. Kennett is the Senior Active Partner of Missouri Cardiovascular Specialists and Missouri Heart Center and one of the most highly respected cardiologists in Missouri.  He has often been the “face of the Boone Hospital Center, serving as its Vice President and Chief Medical Officer and is currently a Trustee. He is a Past President of the Missouri State Medical Association and has served on the Westminster College Board of Trustees, including two years as Chairman.

Mee is Executive Vice President of Finance & Administration, Chief Financial Officer and Corporate Secretary of JB Hunt Transport Services, Inc. where he began his career in 1992 as Vice President of Tax.  Prior to joining JB Hunt, he was a senior tax manager with KPMG LLP and is a Certified Public Accountant. Mee attended the Blue Blazers Investment Club trip to New York City in 2014.

Owens is the CEO of Advanced Technology Services Inc., which provides factory maintenance, industrial parts repair and information technology solutions for manufacturing companies in the United States, Mexico and the United Kingdom. He is a member of the Young President’s Organization and the Illinois Business Roundtable. He also is a graduate of the Bell Leadership Roundtable Program.

Phariss is the Assistant General Counsel for Alorica Inc., a $2.3 billion revenue business process outsourcing company.  He acts as pro bono general counsel for numerous nonprofit companies, is a member of the Board of Directors for the Family Place, a safe house for domestic abuse victims, and is an active volunteer in the LGBT community serving as a member of the Equality Texas Board of Directors.

The final awards of the ceremony will be the Young Alumni Achievement Awards presented to Andrea Long, ’06 from Nixa, MO and Sarah Yates Reddy, ’08, a Kappa Kappa Gamma from Tulsa, OK.

Long is the Managing Attorney for the Medical Legal Partnership and has been instrumental in establishing a program to more effectively treat low-income patients at a large local hospital.  She is also a member of the Nixa City Council and led efforts for a city alternate sentencing court.

Established in 2009, the Young Alumni Achievement Award is presented annually to recognize alumni who demonstrate the Westminster mission through outstanding achievement early in their chosen career and/or dedicated leadership and service to their community and who have graduated within 5-15 years.