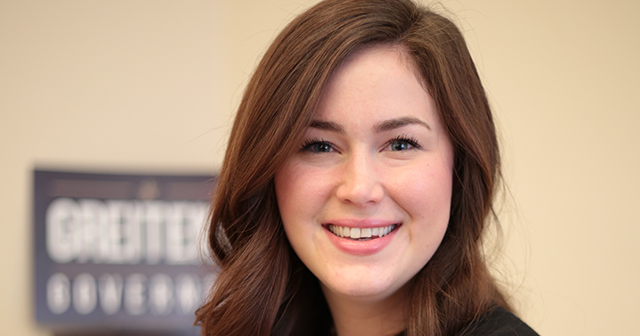 When looking at Meredith Gibbon’s resume and current workplace, it is pretty impressive to find that she only graduated from Westminster in 2011. She works as Finance Director of the Eric Greitens for Governor campaign, where she is responsible for creating and implementing a multi-million dollar fundraising plan. Westminster’s resources and experiences gave Meredith the confidence, communication and leadership skills to get to where she is today.

“At Westminster I developed the self-confidence I needed in order to succeed professionally,” she said.

The Kirkwood, Missouri native was wary of attending Westminster. She wanted to follow her own path and did not think she could do so if she went to Westminster like her Dad (Mike Gibbons ’81). However, after 11 different college tours, she decided to see what the college was about.

“As soon as I stepped on campus, I knew it was the right place for me,” she said.

Gibbons jumped right into Greek Life when she arrived on campus and joined Kappa Alpha Theta sorority. Through the organization, Meredith developed many well-rounded skills that allowed her to learn more about herself while also gaining lifelong friends and a network that spans across the country.

“As the captain of a sports team, you learn to bring a team together and to keep everyone focused on winning, much like a political campaign,” she said.

In Meredith’s political career, communication is key. When she is not on the phone, she is often in meetings with prospective donors. While Gibbons is naturally a “people person,” she was able to further enhance her skills with the help of the Socratic method and critical thinking techniques she learned at Westminster.

“My education and social activities at Westminster College put me in a position where I excel in intrapersonal communication,” said Gibbons. “I now constantly push myself out of my comfort zone to learn new skills and take on new challenges.”

Westminster’s Center for Career Services helped prepare Gibbons for her career by coordinating internships for her while still a student. This allowed Gibbons to graduate with two internships under her belt: one with a state senator and the other with a political fundraising firm.

“I always had an interest in politics, and Westminster has a strong political science department,” she said. “The college’s proximity to the state capitol was also of great benefit to me.”

Gibbons’s political science professors, like Dr. Tobias Gibson, were also very influential. Gibson encouraged Gibbons and another political science student to write about their research findings, which ended up getting published.

“Overall I believe Westminster provides an excellent environment for students to realize their full potential and find their interests,” she said. “Westminster sets its students up for success in the professional world.”

Through Westminster, Gibbons was able to take in a variety of valuable experiences and resources, which allowed her to become the strong and successful person she is today.