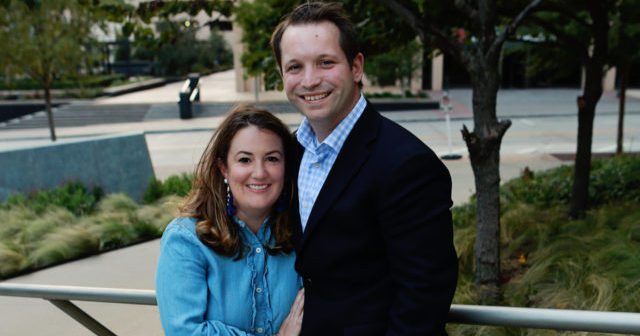 Josh ’06 KA and Jenna Harlow ’06 of Oklahoma City, Oklahoma, are one of the extraordinary examples of young Westminster alumni stepping up to the plate to give back to the College. However, they both stressed to Westminster officials that their gift is in appreciation of their experiences at WC, and they hope it spurs others to give and be involved at this crucial time.

“I don’t know if there was ‘one’ moment in which Jenna and I thought we should commit in a bigger way to the future of Westminster,” says Josh. “I think it was gradual in both our minds as we progressed in our careers and realized that our lives had truly been shaped for the better because of our Westminster experience.”

Consistent donors since graduation and members of the President’s Club, the couple has been involved with the College since they graduated, active in Alumni Council and later underwriting the expenses of student internships in Washington, D.C., and the public policy arena.

When the John Langton Professorship of Legal Studies and Political Science was established recently, Josh and Jenna made a generous $5,000 gift and recruited others to join as well.

This fiscal year, the Harlows came forward in support of Westminster in a substantial way, with a three-year pledge of $25,000 to support the Westminster Fund, the College’s most important annual fundraising need.

“Jenna and I both thought, we owe so much to Westminster, not the least of which is that it’s the place where we first met,” says Josh. “So in committing to Westminster a gift that is important, in terms of timing, to help the College and is financially significant to us, we are hoping it shows our dedication to the future of WC.”

“Josh and I have a core belief that Westminster is the best college in the world,” Jenna stated. “The lifelong friendships and really, the way our college forces you to think, understand, and debate with classmates is vital to success. Westminster changed both of our lives for the better, and we have never forgotten that simple fact.”

Josh was a political science major at Westminster and a member of Kappa Alpha fraternity. He served as President of the Student Government Association. Jenna was an accounting and business administration major and served as SGA Treasurer. Josh is currently a Senior Vice President at Jones Public Relations, Inc. Jenna is an accountant at her family’s oil and gas company, Te-Ray Resources, LLC.

“Jenna and I are fortunate to have extremely supportive families and good careers, and we have caught a lot of lucky breaks along the way,” says Josh. “We are hoping that this gift will signal to our peers that NOW is the time to help Westminster. Additionally, both Jenna and I came together to make this gift because we ultimately wanted to be difference-makers in the lives of students and help them become the next generation of Westminster leaders.”

If you have questions about how you can get involved in supporting the Westminster Fund, please contact Kristina Bright, Director of Annual Giving, at 573-592-6226 or kristina.bright@westminster-mo.edu.

For more information about the ways in which you can give back to Westminster, click here.