Getting to Play: Herschel Grisby ’07 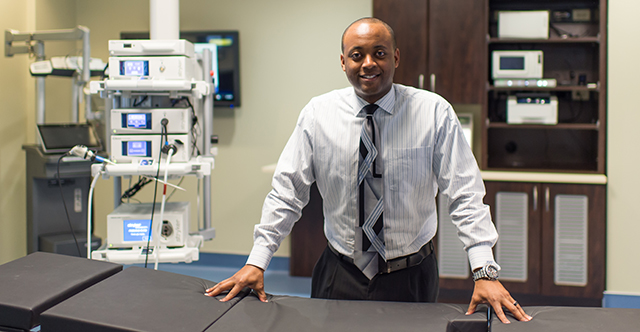 There’s no such thing as a typical day for Herschel Grisby ’07. As group marketing manager for medical instruments creator Stryker Instruments, his days are often spent in the operating room observing live patient surgical procedures. Grisby works on sales enablement tools and product development opportunities by consulting with neurosurgeons and orthopedic surgeons, and through firsthand observations of how the products are used, he’s able to help make them better.

“My ultimate goal is to try to drive health care, primarily through instrumentation,” he says. “That might be in a lab, where we have specimens and cadavers and work with surgeons to try different ideas. We’re learning how improvements to our products will help drive advancement.”

If it sounds pretty medical for a marketing job, it is. But that’s why Grisby is such a perfect fit for the work he does. In fact, when the biochemistry major from Plano, Texas, started college, he planned to become a doctor. He worked part-time during the summers at a large hospital in the Dallas/Fort Worth area, where he worked side by side with a number of gastrointestinal surgeons and asked lots and lots of questions.

“That job, I enjoyed it, but it gave me the realistic side of being a doctor, and it altered my career path and ultimately my experience at Westminster,” he says.

When Grisby returned to Westminster for the fall semester, he talked to biology professor Dr. Mike Amspoker about possible next steps. Amspoker suggested Grisby look into orthopedic and medical device sales.

“It still gives me the health care kick I wanted and keeps me in a hospital setting, but it emphasizes other strengths I already had in communications,” Grisby says.

Those communications skills were evident early on during Grisby’s time at Westminster. In addition to belonging to the Skulls of Seven and the Blue Jay Basketball team, he was president of his freshman and sophomore classes. He studied abroad at the University of East Anglia in Norwich, United Kingdom — an opportunity he encourages every student to experience — and co-created Black Express, an organization he started with his friends to promote diversity and minority growth at Westminster.

“While the organization wasn’t a great success, it gave me the courage to take calculated risks without fear of failure or criticism when it comes to my passions,” he says. “That lesson has made me a better businessman, mentor and, most importantly, a better husband and father.”

Grisby is a self-described family man. He and his wife, Stephanie Grisby, have two daughters: Eden, who will be 3 in July, and Eva, who turns 1 in April. Success, he says, is about happiness and family.

“Not to sound cliché or Miss America, but success, I would say, is happiness — happiness as a family and happiness individually,” he says. “I’m not trying to be filthy rich — I mean, I wouldn’t turn it down either — but I just want to be financially able to support our passions.”

Grisby and his family are now back in Texas after a few years in Nashville, where Grisby held a direct sales position covering the entire state of Tennessee. The job was based 100 percent on commission, and Grisby says it was an important period of growth for their family. The job at Stryker, and the move back to Texas — came just before their second daughter was born.

“Raising a family and ‘leading’ them through times of adversity and change has been my greatest success thus far,” he says. “However, the story is just beginning. Stay tuned.”

Wherever his story is headed, Grisby is grateful to Westminster for the part it’s played in his journey. Admittedly, the Fulton school wasn’t even on his radar until he attended a college fair during his senior year at Plano East Senior High, a school with more than 2,600 students total and more than 1,300 in his graduating class. While waiting in line to speak with recruiters from Washington University, Grisby and his parents met eyes with Emily Blake, the regional director of enrollment services who was recruiting for Westminster one booth over.

“I’m 18 years old from a huge school in a huge city, and all I was thinking was University of Texas, A&M and schools like that, but Emily Blake sold us the dream,” he says. “I looked into Westminster, liked the idea of more interaction with your teachers, and they gave me a full ride. At that point, it was a no-brainer.”

That’s not to say the transition from life in a large Dallas suburb to life in Fulton, Missouri, was easy, and Grisby had moments during his freshman year when he considered returning to Texas. But he found his niche, took advantage of the opportunities available to him and started looking toward the future.

“Westminster is not for everyone, and I think that honesty is important,” he says. “But to see the real benefits of Westminster, you’ve got to look past the four years you’ll be there.”

A former basketball player, Grisby puts it in sports terms. You have two freshman players: One kid wants to be on the varsity team just to be able to say he’s on the varsity team, even though he’ll never really get the chance to play. The other, Grisby says, goes out for junior varsity.

“And he gets to play all the time,” he says. “He or she gets to actually exercise those skills and perfect their craft. By the time those four years are up, I guarantee they’ll be in a much better place than the one who went somewhere just for the name.”

That’s how he views Westminster. “What you get to do is you get to play,” he says. “And you get that much better because of it.”