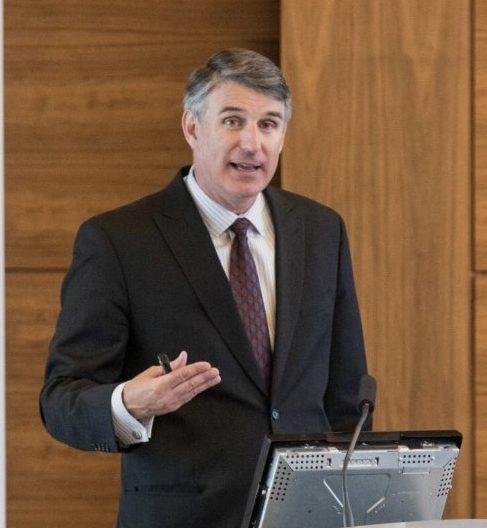 David Egner from Detroit, MI, Class of 1984 and a member of Delta Tau Delta fraternity, who is President and CEO of the $1.3 billion Ralph C. Wilson, Jr. Foundation, will receive a Westminster College Alumni Achievement Award on Saturday, April 13, during the College’s Alumni Weekend.

Egner was appointed head of the Foundation in 2016, which was formed from the estate of Wilson, founder and owner of the Buffalo Bills NFL football team.  The Foundation is charged with spending down all its assets by January 8, 2035, to benefit specific quality of life organizations in 16 counties of Southeast Michigan and Western New York.

“At the heart of our business is the ability to analyze problems and opportunities, clarify the self-interest of partners, inspire shared vision among partners, and seed the development and implementation of programs,” says Egner.  “My education at Westminster provided a solid base of critical thinking skills that is essential to my work.  Being able to approach problems from multiple positions and perspectives, while making informed arguments for progress, is a skillset best developed through liberal arts education.”

Prior to leading the Wilson Foundation, Egner was President and CEO of the Hudson-Webber Foundation for 19 years (1997-2016), a foundation considered one of the driving forces in the transformation and improvement of quality of life in midtown and downtown Detroit.

Egner has more than 30 years of experience working with nonprofits and foundations, starting in 1989 with his early years as an executive assistant to the chairman of W.K. Kellogg Foundation through his work as the founding CEO of the Michigan Nonprofit Association in 1993, guiding the organization through its development and mergers.

He gives a great deal of credit to Westminster in helping him develop his leadership skills.  “I had many lessons in leadership at Westminster—sometimes succeeding and many times learning through failure,” Egner remembers.  “That is one of the beauties of a small college.  You have the ability to take on multiple leadership roles.  I learned the most from my roles as President of Delta Tau Delta and as a resident advisor.  These were great exposures to how to value differing opinions, resolve conflicts, and help build common directions.”

When he is not working for the Foundation, Egner volunteers on the board of the Council of Michigan Foundation, chairs the Michigan office of Foundation Liaison, co-chairs the advisory board for the Johnson School of Philanthropy, and is a member of the Huntington Bank Southeast Michigan Advisory Committee.

He holds an M.B.A. from Western Michigan University as well as his undergraduate business administration and speech degree from Westminster.

Egner will receive his award at a special Alumni Honors Convocation Ceremony to be held at 10:30 a.m. on Saturday, April 13, in the Church of St. Mary the Virgin, Aldermanbury.  The award is approved by both the Alumni Council and the Board of Trustees. Up to six alumni can receive the award annually.