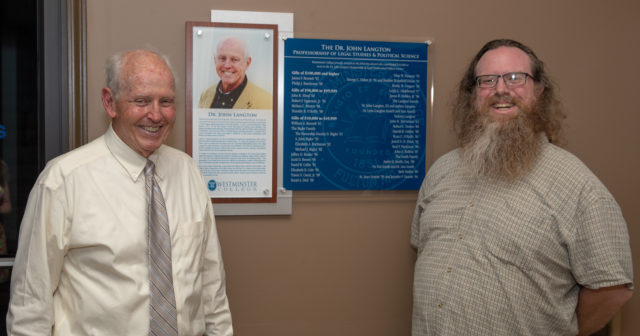 “I am honored to be the inaugural recipient of this professorship honoring a man whose career I hope to emulate but could never equal,” says Dr. Gibson. “I intend to make John and the College proud.”

This endowed professorship of approximately $1.2 million in gifts and commitments is the first named professorship in political science in Westminster history and was initiated by a group of alumni who wanted to recognize the impact Dr. Langton has had on their lives through a permanent faculty endowment.

“I am extremely happy, indeed elated that my esteemed colleague and good friend, Dr. Tobias Gibson, has been chosen as the first Dr. John Langton Professor of Legal Studies and Political Science,” says Dr. Langton. “He almost single-handedly created our Security Studies program, and he is one of the first two faculty members in the history of the College to be accorded early advancement to full professor. Tobias is a truly outstanding teacher, a nationally recognized scholar, and a wonderful mentor and colleague.”

Dr. Langton has taught, inspired, and engaged more than 5,000 students throughout his 35-year career at Westminster and as Chair of Westminster’s Legal Careers Program since the 1980s, helped more than 200 students to attend many of the country’s most prestigious law schools.

In recent years, twelve inductees into Alpha Chi, a national academic honor society at Westminster, have selected Dr. Langton as “their most inspiring professor.”

Seven of Dr. Langton’s students have earned their doctorate in political science, and one of these students, Emily Moore, ’12 from St. Louis, Missouri, just received her Ph.D. from Washington University, where the Chair of the Political Science Department, Dr. Jim Spriggs, ’89 ΦΔΘ of St. Louis, Missouri, is also one of Dr. Langton’s former students. Dr. Langton himself has chaired the Westminster Political Science Department on a rotating basis for over 20 years.