The Flip of a Coin: Bryan York’s Journey to Bank of Oklahoma Senior Vice President 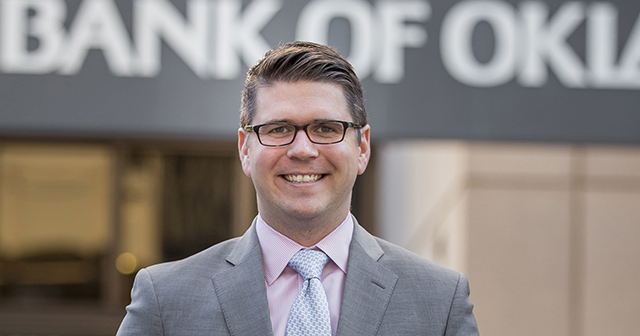 Bryan York remembers the day in 2001 when, as a senior at Holland Hall High School in 2001, his school counselor pressed him to pick a college. He’d narrowed his choices down to two schools — Westminster and the University of Kansas — but couldn’t decide.

“I asked her for a quarter, and I flipped a coin,” York says.

When the coin toss landed on KU, York told his counselor he was going to Westminster.

“I knew I wanted to go to Westminster,” he says about the gut decision. “I knew I could do well at a large school, but I also knew I could excel at a small school.”

Today, having achieved success by age 33 as a senior vice president for the Bank of Oklahoma, where he manages the Oklahoma treasury division, the Westminster Class of 2005 graduate has never regretted the decision.

As an entering Westminster freshman, York says he was really shy and unsure of his future.

“Bankers, engineers, physical therapist: We have a family smorgasbord [of careers],” he says. “I had no idea what I wanted to do.”

Like most new college students, York was apprehensive about his roommate, an anxiety compounded when he found out his freshman roommate was from Texas (York is from Oklahoma and raised to not like Texans, he jokes).

On move-in day, when he walked into his room and found his roommate had already claimed the bed next to the wall and was hanging up the Texas flag, he knew things weren’t going to go well. He was wrong.

“To this day, he’s one of my best friends,” York says.

At Westminster, York felt at home.

“There were people from all walks of life,” he says. “I didn’t feel any pressure.”

He credits his freshman seminar mentor, Jay Howard, with setting a tone from his first day on campus.

“He came in and introduced himself to me and my parents as we were unpacking,” York says.

York says he also had no idea that everyone else felt as awkward as he did. “No one knew each other,” he says thinking back to his first days on campus. “We were all awkwardly shy.”

Despite his shy beginnings during his first semester, he says everything came together.

“I found my niche at Westminster,” York says. “Westminster College gave me confidence, and there wasn’t anything that I didn’t think I could do.”

When he went home for the holidays, friends and family asked why he wanted to go back to Fulton and Westminster.

“I couldn’t explain it,” he says about the draw he felt to stay at Westminster.

Although he says the majority of his high school friends were transferring away from the colleges they had chosen, he knew he wanted to stay at Westminster. He also says many of his friends kept primary ties with high school friends, but Westminster provided him with a close network of friends who superseded high school — many of whom he still maintains connections with today.

“I was in 15 weddings during one summer,” he says. “All Westminster.”

York credits his fraternity, Kappa Alpha, for much of the support and growth he found at Westminster, with the KAs urging him to be a part of not only the fraternity but also the campus and local community.

He became active in Student Ambassadors, Student Foundation and served as the Interfraternity Council vice president, in addition to various leadership roles with his KA chapter. He also balanced his schoolwork and jobs as a bartender and server. As a senior, he was selected as one of the Skulls of Seven, Westminster’s highest honor society.

Describing himself as not a perfect student, York says his college life was a “beautiful chaos of becoming an individual,” with many different life lessons.

“Through my work experience and balancing college and social life, I honed skills that helped me relate to people,” he says.

Through his growth and maturation, York realized he was never going to be the best accountant. He considered focusing his studies on business or financial management but was drawn a different direction — 19th-century British literature — despite a plan to pursue a career in the financial world.

“My dad nearly hung up the phone on me when I told him I was going with an English major,” York says. “When he asked me why this major was going to work for someone going into banking, I told him I would be the only one with British lit on my resume; I would either look really dumb or stand out from the crowd.”

York says the most fulfilling aspects of his college experience were the relationships he formed with faculty, particularly with English professor Dr. Carolyn Perry.

“Dr. Perry mentored me sophomore year through graduation, working with me on everything from papers to college situations,” he says. “She was my toughest critic and challenged me every day. Today, I know I can still pick up the phone and call Dr. Perry.”

“Westminster does a fantastic job of helping you with interviewing, preparing for career and the corporate world,” he says about the help he received on campus.

Balancing interviews between UMB and Aetna, Yorks remembers writing down flight information with a Sharpie while on a spring break trip to Padre Island. Aetna flew him to Connecticut for a final interview.

“This interview wasn’t your standard interview,” he says about the 90-minute interview. “They asked situational questions and wanted examples about failures and successes, obstacles and teamwork.”

Having never encountered this level of interview, York says he wasn’t prepared but knew he had the confidence and skills he needed to succeed in the interview.

“If you had asked me any of those questions my freshman or sophomore year, I would have been the deer in the headlights,” he says.

“As a graduating senior, though, I knew Westminster had given me the confidence to answer the questions.”

York ultimately chose to work for UMB and entered a selective class in the UMB management rotation program. He spent a total of 10 years with UMB, what he calls the best training ground. He rose to vice president of Treasury Management, where he managed $100 million to $6 billion clients and traveling from Washington, D.C. to Denver. When he was promoted to senior vice president and running three territories, he says he found himself managing people who were five to 10 years his senior.

“It was trial by fire,” he says. “I was terrified but fell back on the morals and values I was raised on in order to find my way.”

His confidence again kicked in, and he knew he was preparing for even more opportunities down the road.

When he relocated to St. Louis, he called Westminster friends in the area. “They were my sounding board — my support,” he says.

Leadership and Challenging the Status Quo

Today, York works for the Bank of Oklahoma, having been recruited away from UMB. “The opportunity made sense,” he says about the move back to Oklahoma and living only 90 miles from the town he grew up in.

Now with a bigger bank, York’s conscious that the stakes are raised professionally. Although he wants to be successful, he says he has been careful to not let the job define who he is.

“I spend time on the things I love — music, golf, travel — and with friends and family,” he says.

He credits service experiences at Westminster, such as working with Habitat for Humanity and Meals on Wheels, with helping him keep things in perspective. When work gets stressful, he remembers the community service organizations he volunteered for. “It puts things in perspective when you think you are having a bad day,” he says.

The viewpoint he gained from that service experience is only one of the advantages he gained at Westminster. Another? Learning to challenge the status quo professionally — and successfully.

“I learned how to be more assertive at Westminster,” he says about a trait that has served him well in his career and one that didn’t come naturally. “I was raised to respect others above me, so disagreements weren’t natural, but I learned to be assertive and challenge the status quo at Westminster.”

As a senior, York remembers dealing directly with the dean of students as he represented other students through his position with the IFC. “There were tough situations,” he says. “But I had a voice.”

Maintaining respect for others around him at all levels, York used the confidence and tact he cultivated at Westminster to help him negotiate in his career, and his success is evident. At 33, he’s the youngest on the bank’s leadership committee.