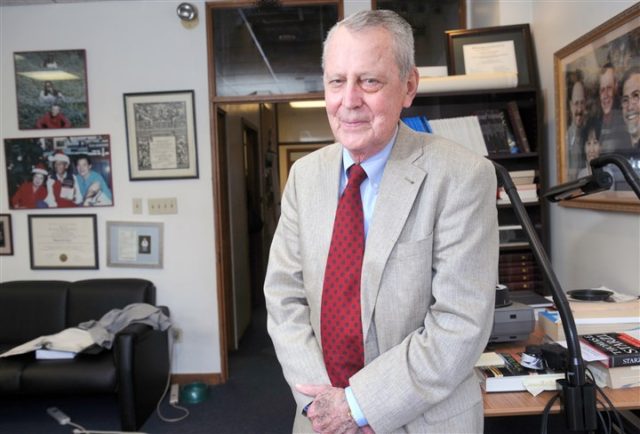 The Wall Street Journal (WSJ) remembers Dr. Thomas E. Starzl, Class of 1947 and a Phi Delt, a man who changed the face of medicine for the second half of the 20th century. If you have a WSJ online subscription, you may see the full story, ‘Father of Transplantation’ Defeated His Own Doubts and Fears. The article text has been placed at the bottom of this post.

‘Father of Transplantation’ Defeated His Own Doubts and Fears: Thomas Starzl pioneered liver transplants while battling critics and grieving over failures

Thomas Starzl, shown in 1985, became the first surgeon to transplant a human liver successfully in 1967 and went on to do hundreds more.

As he completed his medical training in the late 1950s, Thomas Starzl searched for a way to make his name in the annals of medicine. In an interview late in his life, he recalled asking himself: “What’s out there that needs development but looks impossible?”

The choice seemed obvious to him: transplanting organs.

He became the first surgeon to transplant a human liver successfully in 1967 and went on to do hundreds more, in dicey operations that could last as long as 20 hours. Tall, lean and cerebral, he pioneered drug therapies to fight the body’s rejection of foreign tissue. Though less famous than Christiaan Barnard, who in 1967 was the first to transplant a heart, Dr. Starzl was often called the “father of transplantation.”

Yet he was also haunted by the children who died during or shortly after operations, dogged by medical turf battles and cautious regulators, and thrust into ethical debates over how to allocate organs and whether it was worth doing such costly surgery when many people couldn’t even get basic care.

“Most mortal people would have given up,” said John Fung, who heads the University of Chicago’s Transplantation Institute.

Dr. Starzl died March 4 at home in Pittsburgh, a week before his 91st birthday. His memorial service was attended by hundreds of colleagues, friends and admirers, as well as his golden retriever, Chooloo.

Thomas Earl Starzl was born March 11, 1926, and grew up in Le Mars, Iowa. His father, who wrote science fiction as a young man, settled into running a small-town newspaper. His mother had worked as a surgical nurse and wanted her son to become a surgeon.

Latin was his favorite subject in eighth grade, and he was so good at it his teacher wrongly suspected him of cheating, Dr. Starzl recalled in his 1992 memoir, “The Puzzle People.” His writing as a high school senior was so sophisticated that an English teacher accused him of plagiarism.

After serving in the Navy near the end of World War II, he earned a biology degree at Westminster College in Fulton, Mo., then won medical degrees at Northwestern University. He had four years of surgical training at Johns Hopkins Hospital in Baltimore. Stung by what he saw as a slight from one of his supervisors, he moved to the University of Miami medical school for his residency. During that period, he wrote, “I felt like a missile looking for a trajectory.”

In Miami, crime furnished more than enough gunshot wounds to train a young surgeon. He learned the arts of replacing blood vessels. In his spare time, he experimented on dogs, devised a technique for removing livers and began thinking about how to “install” new ones.

As his surgical skills improved, his anxieties about making potentially fatal mistakes worsened. “With growing concern, I came to believe that I was not emotionally equipped to be a surgeon or to deal with its brutality,” he wrote. “I did not like doing the one thing for which I had become uniquely qualified.” He also felt it was too late to turn back.

He obtained federal funding and pressed on with research at Northwestern and later the University of Colorado. In 1963, he made his first attempt to replace a human liver. The 3-year-old child, Bennie Solis, desperately ill, died during the operation. “The surgeons stayed in the operating room for a long time…looking at the ground and saying nothing,” he recalled.

Feeling a lack of support for his projects at the University of Colorado, he moved to the University of Pittsburgh at the end of 1980 and soon made the city a global center of transplant expertise. He talked companies into lending their corporate jets to rush livers to recipients. President Reagan offered Air Force transport to children who otherwise couldn’t reach care.

In 1990, he had coronary bypass surgery. Worn out by travels and debates, he retired as a surgeon but continued researching. Progress, he said, had vastly exceeded his early dreams.

Was he the father of transplantation? “I didn’t make that claim,” he said in an interview late in his life. With a laugh, he added: “On the other hand, I haven’t rejected it.”

Dr. Starzl is survived by his wife, Joy Starzl, a son and a grandchild. Two other children died before him.