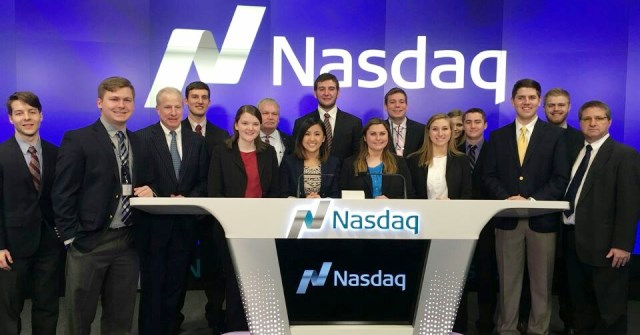 While it hardly seems possible, one of Westminster’s most unique real world education experiences, the Blue Blazers Investment Committee (BBIC), is celebrating its 20th anniversary this year.

Advised by Brock Ayers ’82 (Delta Tau Delta), who founded the group, and Dr. Ed Mirielli, Chair of Computer Sciences, this self-governing organization allows students to experience how investing in the stock market works firsthand.  Until several years ago, Dr. Linda Webster, Professor of Computer Science, was an additional advisor of the group.  Much of the preliminary work of drafting the BBIC mission statement and investment guidelines and organizing the group was undertaken by two of Ayers’ student interns at AG Edwards, Brandon Eckhardt ’97 (Beta Theta Pi) and Jenn (Stumpf) Warren ’97 (Kappa Alpha Theta).  Eckhardt became the founding president of BBIC and Warren the founding vice president.

During the first year of the organization, the Westminster Board of Trustees allocated $200,000 in college endowment funds to the BBIC to invest.  Since that time, the representatives of the Blue Blazers report to the Board at least twice a year on their activities and performance.  The students do extensive research, and they buy and sell stock to build and manage an actual portfolio.

“The BBIC has historically used the ‘investment challenge’ within the membership to learn how to research and select stocks,” says Dr. Mirielli. “Each year the total membership is divided into five or six groups with an experienced member leader, and each group competes for the greatest gains in their portfolio.”

“I enjoyed doing the group analysis on stocks and determining which companies to recommend for purchase,” recalls Eric Koestner ’98 (Kappa Alpha) about his participation in the BBIC. “This time with other members allowed me to build relationships and gave me an opportunity to gain perspective from others with differing views.”

The group originally was managing a $200,000 portfolio, but today their wise investments over the years have grown that total to $550,000 (read about 2014 milestone), in addition to helping fund educational and experiential opportunities.

One of the highlights of BBIC membership is the group’s periodic trips to New York City to gain an insider’s look at our nation’s business and financial centers. Regular stops for the group include attending the Opening Bell Ceremony at NASDAQ OMX and visiting the New York Stock Exchange, JP Morgan Asset Management, Bloomberg Business News, Wells Fargo Securities, and other Wall Street financial institutions.  The group made their 8th trip to New York City in February 2016 trip. Over the years, the BBIC trip to NYC has been featured on CNBC twice as well as a number of other major media outlets.

“Visiting the NYSE was a dream come true,” says Will Miller ’16 (Kappa Alpha). “I was able to tour the floors of one of the largest financial hubs in the world, talk with experienced traders such as Peter Costa, tour the museum, and see firsthand the computer trading systems at work.”

One of those who was instrumental in getting the New York trip off the ground was Steve Ford ’01 (Delta Tau Delta), when he was BBIC president.  “Some of my greatest memories of the Blue Blazers are planning and participating in early research and educational trips such as the inaugural NYC trip and taking 8 a.m. calls from Brock to discuss a stock position after a night of Westminster ‘networking,’” Ford recalls.

Miller’s favorite memory is the opportunity to attend The Money Show in Las Vegas on behalf of the Blazers in 2015.  “Surrounded by renowned traders, I was able to soak up advice and grow my knowledge base,” says Miller. “Most notably, I was introduced to several technical strategies which I still implement to this day.”

Koestner enjoyed doing group analysis on stocks and determining which companies to recommend for purchase.

“This time with other members allowed me to build relationships and gave me the opportunity to gain perspective from others with differing views,” Koestner says. “Blue Blazers also really helped me deepen my passion for the financial markets and investing.  It gave me a better understanding of portfolio construction and how the capital market actually works.”

All three agree that their membership in BBIC has given them an edge in their professional life.

“It’s a confidence builder in that you have better industry context walking in the door to your first interview and job,” Ford says.  “When you have that, you not only get the job, but it is easier to stand out among your peers.”

Obviously that competitive advantage has worked for these three. Today Ford is Managing Director and Head of North American Sales for Pacific Current Group.  Koestner is a General Partner in Investment Advisory for Edward Jones.  And Miller landed a coveted internship with Wells Fargo this past summer and has been recommended for a prestigious full-time position with the company upon graduation.

“BBIC has a great leadership model in place to the level and extent that students take advantage of it,” says Dr. Mirielli.  “Our Blazers are people who are interested in learning about investments and willing to work hard, absorb a great deal of new material at a rapid pace, and share what they have learned with others. Many of our BBIC executive leadership have gone on to achieve great things in the finance industry and other fields.”

Building on such an exciting past, the Blue Blazers Investment Committee looks forward to remarkable achievements in the next 20 years.  Plans are already underway for a commemorative event for the 25th anniversary, but unfortunately, Blue Blazer membership files are not complete, particularly for members in the early years.  The College would like to request that any alumni who were members of Blue Blazers send an email confirming their membership to alumni@westminster-mo.edu.