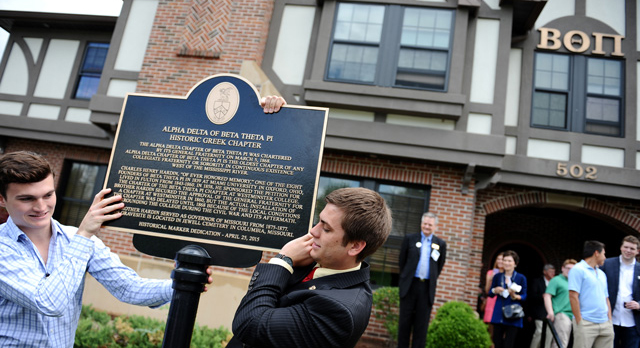 To commemorate the fraternity’s historic significance, the Alpha Delta Chapter of the Beta Theta Pi fraternal order dedicated a marker at their house on April 26 during Alumni Weekend 2015 at Westminster College.

Alpha Delta is the oldest chapter of any fraternity or sorority in continuous existence west of the Mississippi River.

Remarks were delivered by alumni Jim Middleton ’67 from Denver, CO and Russell Bennett ’67 from Lawton, OK about the history and historical significance of the chapter.

Westminster President Dr.  George B. Forsythe spoke about the relationship between the fraternity and the College and Zachary T. Haines, Beta Theta Pi General Fraternity Assistant Historian and East Great Lakes Regional Chief, discussed the founding of the national organization and the fraternity’s notable alumni.

Carson Butts’16 from Gilbert, AZ, who is the current Alpha Delta President, spoke about the chapter’s commitment to carrying on the Beta tradition.

The Westminster Beta chapter was chartered on March 5, 1868.  Charles Henry Hardin, who was one of the original founders of the fraternity in 1839, sponsored the petition for the charter of the chapter at Westminster in 1858. Hardin served as Missouri Governor from 1875-1877.

In the beginning, the Beta house had no meeting space and met in the private rooms of the members and developed social programs that included literary exercises and an end of the year banquet at the local hotel.

A huge opportunity became available in 1920 when E.M. Tuttle offered six lots facing the Hill section of the Westminster campus for sale.  The Betas bought one of the lots and built a new home in 1928.

The Beta House was destroyed by fire October 26, 1946.  House members were moved into private homes and barracks until the house could be rebuilt and restored in the fall of 1947.

In 2001 with the launch of the College’s historic Campaign for Westminster, the renovation campaign for the Beta house began.  Construction was completed and the house re-opened in the fall of 2008.

“Westminster College’s partnership with Alpha Delta has helped countless generations of young men to grow academically, professionally, and personally into leaders who have made and are making a difference in the world,” says President Forsythe. “Westminster College looks forward to the continuation of this strong partnership in the years ahead.” 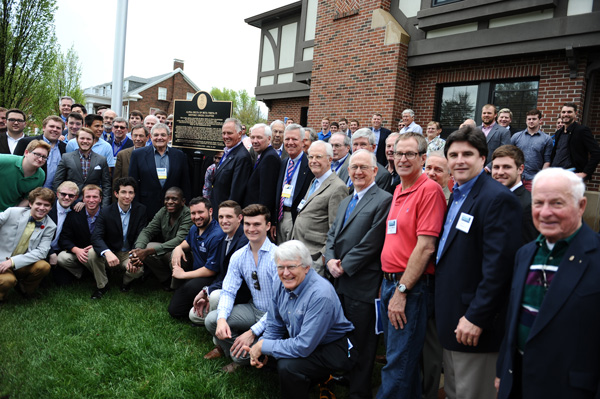