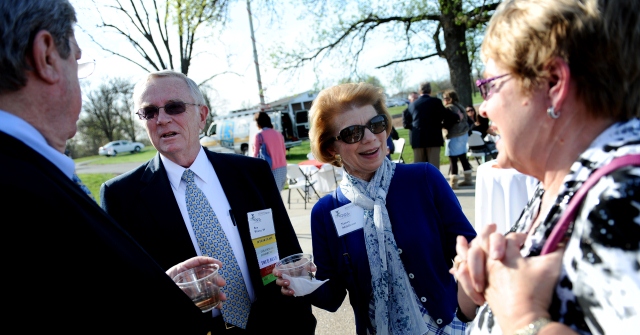 Hundreds of alums and their family members joined us for events and festivities during Alumni Weekend 2014, held April 25-27 with the theme “Our Roots Run Deep: A Legacy of Leadership.”

Alumni Weekend 2014 included many traditions, including the Westminster/William Woods golf tournament and cocktail party, the Old Guard Luncheon, a lecture by Bill Parrish, the Golden Anniversary Dinner, and campus tours provided by students.

No Alumni Weekend would be complete without celebrating many of our own for their success and devotion to excellence.  See the complete list of Alumni Achievement Award winners here.  Additionally, Beth Howard Stubbs, ‘00, was honored at the Gathering of Westminster Women with the Remley Women’s Award.

The weekend concluded with great honor paid to the man known to many as Mr. Westminster, John E. “Jack” Marshall.  Westminster’s alumni building was dedicated as the “Jack Marshall Alumni Center.”