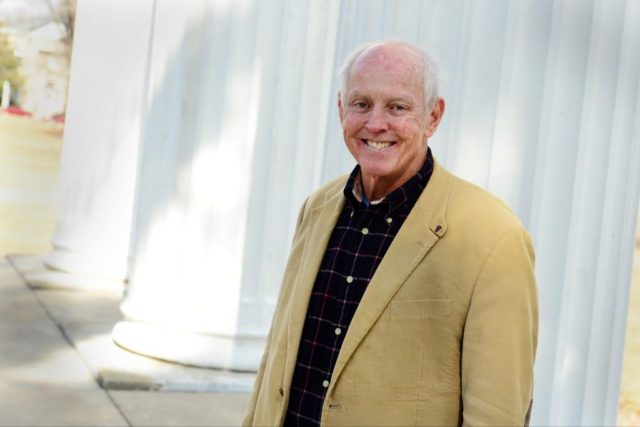 Teachers change through the lives of the students they touch, but the students of Westminster College Professor of Political Science John Langton, affectionately known as “Dr. John,” have taken it a step further.  A group of them have come forward to secure commitments of over $1 million to endow the Dr. John Langton Professorship of Legal Studies and Political Science.

“The Langton Professorship is the extremely gratifying and deeply appreciated icing on the cake of my 35-year career at Westminster,” says Dr. Langton. “But the delicious cake itself has been helping my students to learn and grow and realize their dreams.”

Their mission is to ensure that Westminster’s pre-law program and its Political Science Department have a dynamic and effective leader to step into Dr. Langton’s shoes to teach a new generation.

“We were all very excited to help with this project in honor of Dr. Langton, who has had  such a tremendous impact on an entire generation of Westminster students,” says Bennett. “We hope that the named professorship or chair will be a nice honor for him over the remaining years he teaches at the College and also help his legacy live on for many years after that.”

In their solicitation letter, they say: “We hope, like us, you can recall his snappy classroom  teachings, his sharp insights (and asides) and maybe most important of all, his valuable out-of-classroom guidance and life lessons.  For many of us, without a Dr. John in our lives, college would have been much more difficult to figure out and to determine the best path going forward, to clear the hurdles of young adulthood, and go on to lead productive, fulfilling lives.”

Dr. Langton has been Chair of the Political Science Department on a rotating basis for over 20 years.  He has chaired the Westminster Legal Careers Program since the 1980s and helped more than 200 students attend many of the country’s most prestigious law schools.  Six of his students have earned Ph.Ds. in Political Science, and another one is currently a doctoral student at Washington University, where the chair of the department is a former student of Professor Langton.  He also designed a pre-law minor, which is open to all students and  is one of the finest distinguishing features of the College when compared with other institutions.  Westminster is one of the few schools in the country to offer a pre-law minor to all its students.

Since he came to Westminster in 1981, Dr. Langton has taught more than 5,000 students.  He is the winner of the Governor’s Award for Excellence in Teaching  in 1997 and  received the Alpha Chi Lifetime Achievement for Excellence in Teaching and Service in 2012.  He has been selected since 2001 by eleven inductees of Alpha Chi, Westminster’s honorary academic society, as their “most inspiring professor.” His articles have been published in The American Political Science Review, the American Journal of Sociology, The British Journal of Sociology, Administrative Science Quarterly, American Behavioral Scientist and Missouri Lawyers Weekly.

The campaign is more than halfway toward its original goal of $2 million, which would fund an endowed chair.  Funding is ongoing and gifts of all sizes are still welcome at www.westminster-mo.edu/giving.