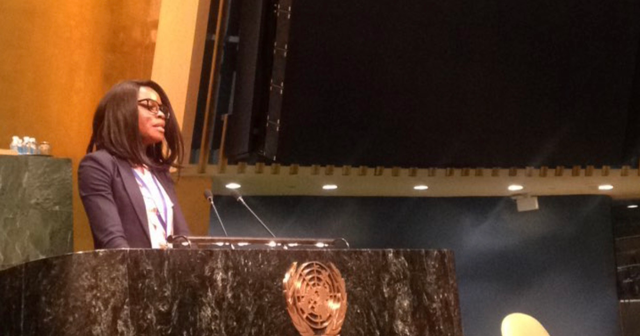 Westminster alumnae Jane Okafor, ’13, a J.D. candidate at the Loyola Law School in Los Angeles, CA was selected as one of three Outstanding Youth Delegates at the 2017 Winter Youth Assembly at the United Nations (UN) for her NGO’s (non-governmental independent not-for profit) work in Nigeria toward the success of the Assembly’s 2030 Agenda for Sustainable Development.

Okafor is originally from Anambra State in Nigeria and majored in international studies and Spanish while she was at Westminster.

“Let us never doubt the strength and impact we, the youth, have towards the Sustainable Development goals,” says Okafor. “I am so grateful for the support and encouragement I received from Professor Tobias Gibson while I was his student at Westminster and even afterwards.”

Okafor was awarded a plaque, a $1,000 grant and the unique opportunity to speak at the UN podium.

“In this field, my NGO P3 stands as a voice for local communities working together with elected officials to ensure accountability and effective implementation of policies that would deliver desirable infrastructure in support of growth and wellbeing of the nation as a whole,” she told the Assembly Feb. 2. “I firmly believe that a system of accountability will lead to the creation of a responsible and inclusive government.”

Her NGO P3 stands for public policy, public relations and politics, a combination which Okafor believes is essential in grass-roots work to build awareness in communities, teach members of the communities their rights and how to attain them and the proper way to lobby for what they want to achieve.

Okafor first realized what a positive impact personal contributions can make to a worthy cause when she was volunteering with Nigerian youth in the Internally Displaced Persons camps. A little girl in one of the camps named Fatima who urgently needed access to health care facilities was unable to receive them because the officials in charge had misused the funds that had been allocated.

“The youth volunteers demanded through public awareness and reaching out to state representatives that the officials in charge of the budget use the funds accordingly,” she remembers. “This resulted in provision of health amenities to the camp.”

Okafor is originally from southeastern Nigeria and she described to the Youth Assembly the challenges she faced working on behalf of the people in northern Nigeria who have different religions, languages and cultures.

The Youth Assembly of the United Nations began as an annual forum in 2002 and was expanded into a biannual conference held at the United Nations Headquarters in New York City. The Assembly gathers the brightest and most active young leaders from across the globe to tackle the world’s greatest challenges.

This 19th session of the conference aimed to highlight the interdependence and universality of the Assembly’s Sustainable Development Goals by exploring multifaceted global issues such as poverty, education and sustainable consumption and production.