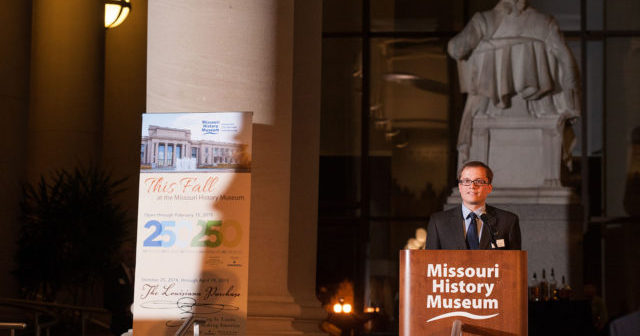 Kloppe is the Public Historian (2013-present) at the Missouri History Museum in the St. Louis area. In his position, he tries to find ways to engage St. Louisans with their history, serves as the content lead on exhibits, acts as a community ambassador for St. Louis history, does interviews with area media and writes for museum blogs and publications.

“I met people at Westminster who encouraged me to grow and figure myself out,” says Kloppe. “I had to find out who I was and what I liked before I could pursue a career that I found fulfilling in some way. My friends, my classmates, and my professors were the ones who pushed me not  to settle, and the ones who encouraged me to keep going when I found things that made me happy.”

The Young Alumni Achievement Award is presented annually to alumni who demonstrate the Westminster mission through outstanding achievement early in their chosen career and/or dedicated leadership and service to their community and who have graduated within the past five to 15 years.

Before assuming his position as public historian, Kloppe was a teaching assistant and instructor at Saint Louis University. He has also been a guest lecturer at Fontbonne University.

In addition to his B.A. degree from Westminster in English and Sociology and Anthropology, Kloppe holds an M.A. degree in American Studies from Saint Louis University.

“The faculty and students at Westminster encouraged me to find and interrogate connections between things that may not appear to be connected on the surface,” says Kloppe. “I also think Westminster taught me to be confident in my instincts, but also to be unafraid to challenge those instincts. This has helped me in my career tremendously. It has helped me to have the confidence to chase ideas down rabbit holes that appear interesting, but also to have the presence of mind to changes tracks as research leads me in unexpected directions.”

Kloppe will receive his award at a special Alumni Honors Convocation Ceremony to be held at 10:30 a.m. on Saturday, April 21, in the Church of St. Mary the Virgin, Aldermanbury on the Westminster campus in Fulton, Missouri. The award is approved by both the Alumni Council and the Board of Trustees. Only two alumni can receive the award annually.