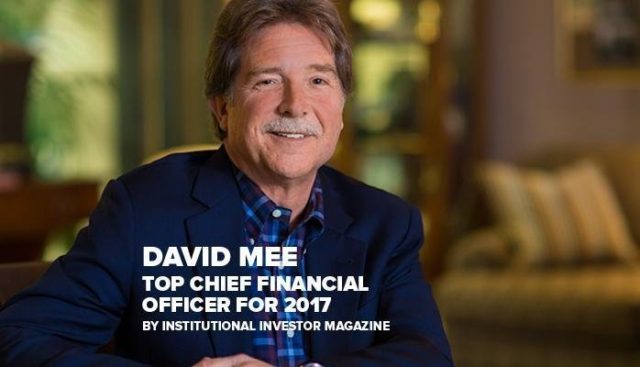 David Mee from Fayetteville, AR, Class of 1982 and a member of the Delta Tau Delta fraternity, received a Westminster College Lifetime Alumni Achievement Award on Saturday, April 29, during the college’s Alumni Weekend.

He began his career with the company as a vice president in September 1992, assumed additional responsibilities associated with risk management in 1997 and was elected corporate secretary in April 2008. In October 2009 he became executive vice president and chief financial officer.

“I chose accounting as my major on the advice of my father,” says Mee. “He thought it was a good choice so I would be able to find a job—and I got a great education in accounting.  However, the liberal arts experience, the Greek life and the personal interactions I experienced while at Westminster taught me much more about succeeding in business and dealing with people. It transformed me from thinking like an accountant to succeeding as a business person.”

Mee has been named to the Institutional Investor’s 2017 All American Executive Team—CFO in the Industrials/Airfreight and Surface Transportation category for all sized publicly held companies and overall best CFO for Midcap-sized companies in the same category.

Prior to joining J.B. Hunt as a CPA, he was a senior tax manager with KPMG LLP. In this position he served several public companies, including J.B. Hunt, and had specialized training in insurance and employee benefits.

Mee resides in Fayetteville with his wife Elizabeth and three children, Chris, Zach and Maddie.

Mee will receive his award at a special Alumni Honors Convocation Ceremony was held on Saturday, April 29, in the Church of St. Mary the Virgin, Aldermanbury on the Westminster campus in Fulton, MO. The award is approved by the Alumni Council and requires a motion and vote from the Board of Trustees for approval.  Up to six alumni can receive the award annually.