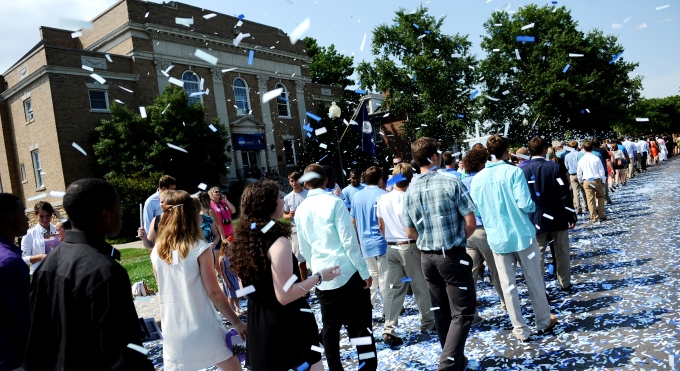 The flow of packed boxes and visiting parents on the Westminster College campus will begin at 8 a.m., Saturday,  August 16, as 287 new students arrive to move in their residence halls and participate in the ceremonial rites of college life.

The new students hail from 17 states and 30 different countries.  Sixty-three of them come from Central Missouri (Jefferson City-13, Columbia-10 and Fulton-9).  Twenty-eight of the new students are “legacies,” meaning a grandparent, parent or sibling attended Westminster.

At 3 p.m. the new students will process to The Hill part of campus to participate in one of Westminster’s most revered traditions, The Columns Ceremony.

The Columns Ceremony takes place in front of the six white columns that remain from the first administration building, which was destroyed by fire.  Students take the Athenian Oath,  and then walk through The Columns onto the campus to begin their educational journey.  The only other time they will walk through The Columns again is during Commencement exercises when they walk back into the world.

Students at The Columns will hear inspiring messages from two respondents, Sydney Franklin from Carrollton, TX, and Lucas Theroff from Jefferson City, MO.  Theroff is a legacy.  His sister Sadie is currently a sophomore at Westminster and his father Tim and uncle Ken are both Westminster graduates.

Following The Columns Ceremony, new students will be led to Champ Auditorium at 3:30 p.m. for Convocation. This year’s Convocation speaker is Sara Hart Weir, ’04,Vice President of Advocacy & Affiliate Relations for the National Down Syndrome Society in Washington, D.C.