New Student Comes with Determination to Change the World 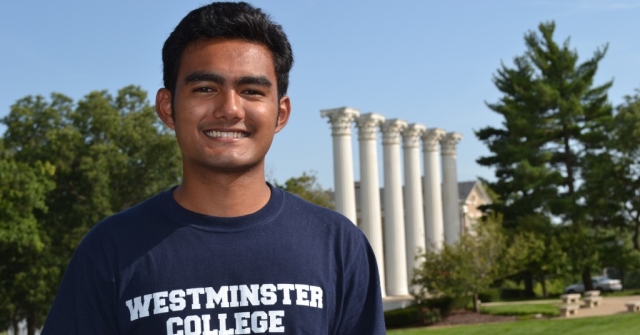 When new Westminster student Shrijan Amatya from Kathmandu, Nepal, was looking for a school in the United States, he wanted to attend a college or university that emphasized leadership…and with good reason. Amatya had already amassed the leadership credentials and experiences within his short life span that many would aspire to reach in a lifetime.

Introverted during his years at Galaxy Public School, he found the activities of debating, journalism, and school prefect (student council) that he discovered by joining A-Levels at Chelsea International Academy brought him out of his shell. He also worked as a City Environment Volunteer.

Yet he still had no idea what direction he wanted his life to take until he participated in a youth convention called Nepalko Yuwako Yuwa Sammelan where he met Nimesh Ghimire, who was involved in a number of social startups. Amatya joined one of his projects for six months.

In 2011, he had the opportunity to travel outside the Kathmandu Valley where he had spent his life to work on the project Empowering Asia and began to gain an overall view of the strengths and weaknesses of his country.

He also was one of the initiators and organizers in Kathmandu of iMarch, the largest youth-led movement on climate change, which lasted a week and involved more than 100 global events.

However, the life changing event for Amatya was being selected as one of 60 students from 3,400 applications to attend Global Changemaker, a convention in the United Kingdom with participants from more than 30 countries. “This was a huge opportunity for me, not only to represent my country at an international arena but to understand how youths from other countries think,” says Amatya.

In moving ahead, Shrijan is helping lead Nepal’s first Innovation Lab in a rural village in western Nepal. The Lab, called the Peace Innovation Lab, (www.peaceinnovation.net), is a local innovation hub-a place where local community members have access to tools and resources to design their own solutions to local challenges.

The Lab runs regular Innovation Camps and Leadership talks; has introduced high speed wireless internet and a telemedicine hub that now serves over 2,500 people. At the same time, they are collaborating with a number of local and international partners to design and test community friendly models that enable local villagers to be active creators of technology in their own communities.

Amatya plans to major in social innovation and entrepreneurship at Westminster. He wants to return to his home country of Nepal ready to “work even harder to bring about positive change in society.” With Westminster’s reputation for preparing extraordinary leaders to make a difference in the world, Shrijan Amatya couldn’t have made a better choice of colleges to attend.