Westminster College expanded to open a new campus in Mesa, AZ, a rapidly growing and dynamic suburb of Phoenix, in Fall 2013. The following is one of four Q&A’s with Mesa students to find out their take on the Westminster experience in Mesa after their first semester.

Joseph Nieves is a junior creative writing and transnational studies major from Mesa. 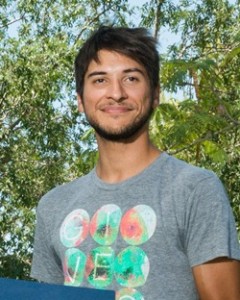 Q: What drew you to Westminster?

Joseph: Everyone I spoke to from Westminster, in particular Hillarie Price and Bob Seelinger, were most concerned with what it was that I wanted from my education and beyond. I never felt like I was being shuffled through an assembly line.

Joseph: I transferred to Westminster from Mesa Community College. At both schools I found small class sizes and incredibly smart, dedicated teachers.

I’ve had conversations with students at the big state university. Often they’ve expressed a feeling of tedium, like they’re just progressing through they’re programs by going through the motions. At Westminster, I’ve felt very much engaged in every course. It’s been invigorating.

Q: What was your most memorable experience in the first semester?

Joseph: I helped coordinate and hosted a literature night on campus. We had an open mic featuring members of the writing group we started (including myself), followed by a 30-minute set by a prominent local poet named Shawnte Orion. It was one of a few leadership experiences I got to experience last semester and it was tremendous fun.

Q: Which faculty member has most influenced you?

Joseph: Mark Young. It’s no surprise, really. He’s an English teacher. I’m an English major. Learning in his classroom is a collaborative experience, not just between students but with him as well. He doesn’t teach us the right answers, he teaches us how to ask the right questions.

Q: What are you experiencing at Westminster that you believe will give you an edge in the job market upon graduation?

Joseph: Well, I’ve never been much of a facilitator, but last semester I was the head of the writing group on campus and I also drafted our club’s constitution, both of which were new experiences for me. I helped coordinate the literature night, and I also organized a student and faculty discussion on racism based on an article in the Christian Science Monitor for my history class.

As first experiences go, I feel they were pretty successful, but what’s really exciting, where I feel I am really growing, is in reflecting on them with faculty and advisors and seeing how I can improve them in the future.