Giving Thanks: Scholarship helps this Chicago “College Girl” make it on her own 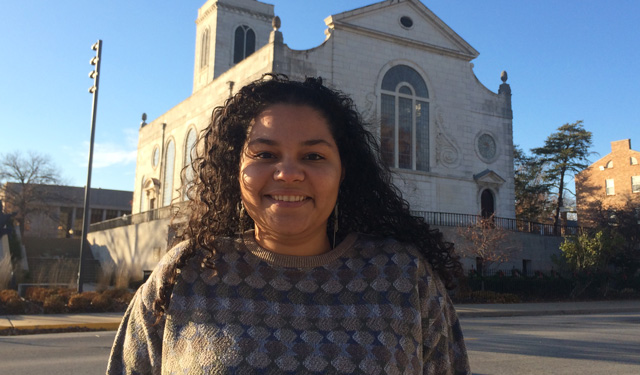 Chicago-born and raised, Becca Cameron has a gift for optimism and seeing far beyond what is in front of her.

“I didn’t exactly live in the slums, but it was close,” the Westminster sophomore says. “Poverty is a cycle. When you are born without money, it’s hard to get to a point where you do.”

Conversation with Cameron is dotted with her laughter and big smiles as she talks about her journey as a first-generation college student to Westminster. She exudes positive energy in everything, even while describing a path to college that most wouldn’t call easy.

“Without scholarships, I wouldn’t be here. It’s amazing,” she says.

“I was asked to write a thank you note to a scholarship donor – I wrote a thank you essay,” she says, laughing, revealing the breadth of her gratitude.

Cameron is a recipient of Westminster’s Triple S Scholarship, an annual, need-based, academic award of up to $17,000 for students from underrepresented populations.

She is the oldest of seven sisters. Her parents separated when she was young, and her grandmother has played a big part in her life. Below, she stands (back, center) with her six sisters on her high school graduation day. 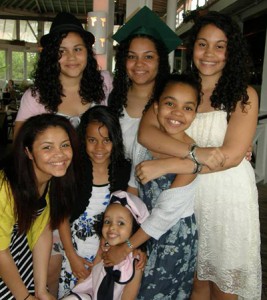 Becca Cameron (back-center) on her high school graduation day with her six sisters.

In applying for college, Cameron took a step most students don’t have to – declaring independent status on her Free Application for Federal Student Aid (FAFSA), noting a family contribution of zero. Westminster, similar to many other colleges and universities, uses the FAFSA to finalize financial aid packages and determine need.

“It solidified I was alone in this,” she says about declaring independent. “I thought ‘I’m going to college – alone.’

Before I thought I could go to the mall and buy new shoes. Now my money is going to buy books and pay for my expenses.”

Cameron speaks with awe of the situation and appreciation for where she is, not self-pity.

“My grandma wanted me to be independent – to do it myself, as an adult,” she says.

In her early high school days, Cameron says she was a good student but slacked off. Cameron credits her grandmother Susan Rutz for getting her out of that situation and enrolling her in Fremd High School, outside of Chicago, considered by many to be the best in Illinois.

Since Rutz lived near Fremd, Cameron moved in with her grandmother, a relationship bound by love but not blood. Rutz is the mother of Cameron’s former stepfather, and despite her son’s divorce from Cameron’s mother, she stayed involved in Cameron’s life.

“I straightened up, and I learned I love history,” Cameron says about moving in with Rutz and enrolling in Fremd.

Cameron found high expectations, opportunity to focus on her studies, and a new freedom in her new home.

“I didn’t have to worry about my sisters being taken care of,” she says. “My grandmother expected more from me, and she paid for everything.”

In high school, she found support and a mentor through her history teacher, Kevin Palmer. Cameron jokes about being a nerd, and her passion for history and learning shines through when she talks about her studies.

At Westminster, Tobias Gibson is one of her favorite professors, even though she says he is a “tough professor” and she gets nervous going to his class.

“He forces you to grow up. I never miss a reading – Tobias is great,” she says in the same breath.

She plans on declaring a double major in security studies and history at Westminster, and she works at the National Churchill Museum as part of campus work-study employment.

Winston Churchill is one of the reasons why she was interested in Westminster, the site of Churchill’s famed “Iron Curtain Speech” in 1946.

“I think Churchill is the coolest person ever,” Cameron says. “A strong person … There aren’t enough people like him who want to change the world anymore.”

Below, Cameron shows her little sister Taylor a bust of Winston Churchill on campus during Family Weekend 2013. 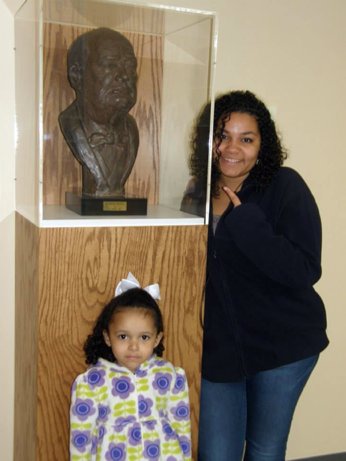 Working hard for her future

Westminster, eight hours from her home, was the closest school she applied to. Her final college decision came down to Vermont’s Norwich University, America’s oldest private military college, and Westminster. Her financial aid package from Westminster helped her make her decision.

She credits Aimee Bristow in Westminster’s financial aid office for helping her file her FAFSA.

“Few students apply as independent, but it’s a growing number,” says Bristow. Students must qualify and demonstrate circumstances to prove they are on their own to support their college education.

Cameron acknowledges that her college situation is different from others.

“I have friends who have cars paid for by their parents,” she says, smiling. “I just have to work hard.”

She says it makes life more serious for her: “I have to think of my entire survival as my job.”

This Thanksgiving, Cameron will remain in Fulton and enjoy the holiday with friends, picking up extra hours at the Museum over the break, and she’s appreciative of the opportunity to earn a little more. The cost of travel to Chicago – and knowing she would have to do it again for Christmas break a couple of weeks later – didn’t make traveling for Thanksgiving an option for her.

When she does head home for the holidays, she knows she’ll have a warm welcome, feeling her family’s pride for her.

“There’s always a way to go college,” Cameron says. “Even if you have to work harder for that scholarship. Write that essay – it could change your life.”

Looking back at the environment she grew up in during elementary school, Cameron expresses hope and encouragement for others to break out of the cycle of poverty.

“Be your own person. Don’t be afraid to break the system,” she says. “It’s okay to be a nerd.”

Cameron’s taking 18 hours this semester, in addition to working. In her spare time, she tries to keep her time on Netflix to a minimum, and she likes to read. She says she reads Pride and Prejudice at least four times a year.

“Mr. Darcy is the fictional love of my life,” Cameron says.

She hopes to earn a Master’s degree in military history after completing her degree at Westminster in 2017.

“I didn’t have any other choice,” Cameron says about going to college.

“I wanted more than what was offered at home – and I wanted to do it for my sisters, to lead the way.

If you want to have a good job, college is part of it.” 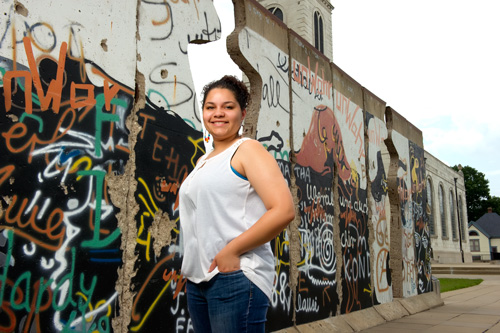 Above, Becca Cameron during her first semester at Westminster, fall 2013.