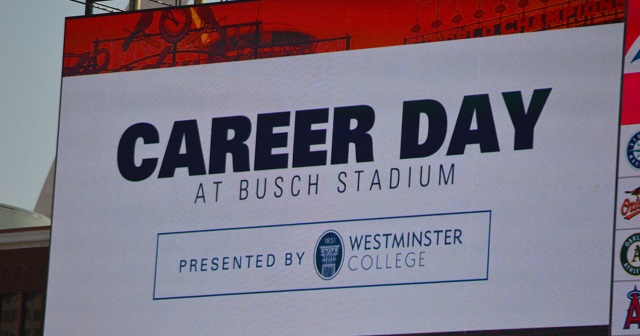 Westminster admissions representative Michael Gruzeski also attended, talking to students at an information booth for the College. He was also interviewed on the jumbotron.

“We showed students that Westminster College has a lot to offer through our academics, athletics, study abroad, and extracurricular programs,” Gruzeski says.

Croghan, who used to work for the Cardinals front office, enjoyed the chance to join his former colleagues on the panel and share with the high school audience about Westminster’s wealth of opportunities.

The most compelling part of the day for Croghan came during the College Fair. “I saw students talking with Michael Gruzeski about the range of Westminster College programs available for them to consider.”

Croghan sees the potential for future recruitment opportunities and possible internships for Westminster students with both the St. Louis Cardinals and the Kansas City Royals.

“Partnering with a Missouri icon like the Cardinals is a key component of Westminster’s marketing strategy to reclaim market position as one of the top liberal art schools in America,” says Poole.

View photos from the event below.