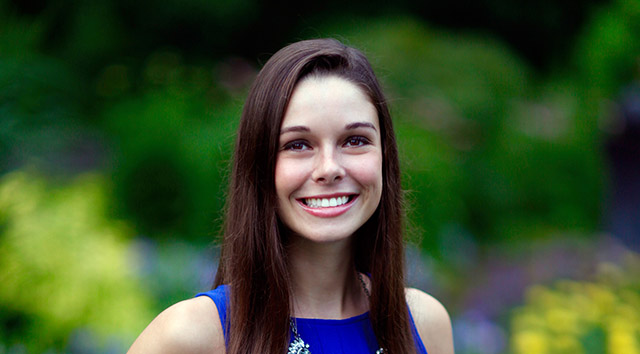 For incoming Westminster freshmen entering with an undecided college major, Camille Todd ’15 says not to worry.

“It’s okay,” she says. “You don’t have to have every detail of your life figured out yet.”

“I was one of the freshmen who didn’t know what they were going to do,” she says about arriving at Westminster after her graduation from Nerinx Hall High School in Webster Groves, MO.

This spring, Todd graduated from Westminster with a Bachelor of Arts degree in English and received a full-ride scholarship to attend St. Louis University School of Law this fall.

“I was very undecided of my future,” she says about her first year at Westminster. “Not like I am today.”

Knowing what she didn’t want to major in helped her narrow down her options, and sophomore year she made a decision that became pivotal to her Westminster journey, her personal development, and her vision for her future.

“Studying abroad was a big decision for me,” she says. “It made me more independent. Before that, my parents were only an hour-and-a-half away if I needed them.”

Todd spent the spring semester of her sophomore year at the University of Winchester in the United Kingdom. While there, she focused on her passion for English, studying Shakespeare, drama, British lit. She traveled often with seven other Westminster students also at Winchester, taking trips to Ireland (the Cliffs of Mohr was one of her favorite stops), London, and Germany.

Visiting the Dachau concentration camp in Germany on a dismal spring day was a powerful experience for her.

“We didn’t talk. I was awestruck,” she says. “It affected my perspective on life.”

“Studying abroad helped me to know who I am, what I want to be,” she says.

She returned to Westminster the following fall, and by the middle of her junior year was ready to declare her major: English, with minors in Religious Studies and History.

Her mom was worried that an English degree wouldn’t be practical, but Todd saw her path unfolding as she completed her studies at Westminster.

“You have to think – what are you good at, what are you interested in?’” she says about trying to figure out a major and career path. “For me, it was reading, writing, and problem solving, and I like following court cases.” 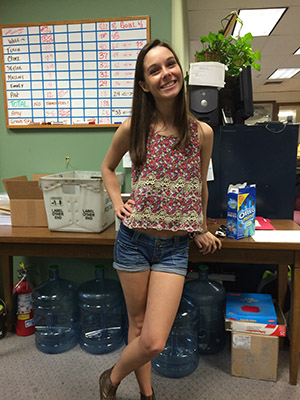 More than a work-study job, working in the Admissions Office at Westminster became an unexpected source of support for Camille.

Finding a Mini-Family through Work-Study

One of the most impactful aspects of her Westminster experience is one that most might not expect: Her work-study position in the Office of Admissions.

“Working there was one of the best decisions I made,” she says. “I love the people there. They became my mini-family.”

As a quiet freshman, Todd found support from the Admissions staff. “They always asked about school, socializing. It was nice to have that every day,” she says. “They gave me a confidence boost to apply to law school.”

From her Admissions family to her sorority, Kappa Alpha Theta, Todd found a home a welcoming environment at Westminster within which to thrive.

“I felt so welcomed, such a sense of community,” she says, describing her very first visit to campus, when she knew Westminster was the right place for her. “It’s sounds so cliché, but you just know. I didn’t expect to feel that way.”

She also gives credit for support to her advisor Dr. Maureen Tuthill, Associate Professor of English, and Cinnamon Brown, Assistant Professor of History. She turned to both for letters of recommendation for her law school application.

“Dr. Tuthill was always there if I needed anything,” Todd says. “And Dr. Brown pushed me to become a better writer and a better student.”

“I’m super good at procrastinating, and she helped me not to do that,” she adds.

Todd says she wasn’t involved in a million activities on campus, and it didn’t negatively affect her getting into law school.

“Don’t be afraid to focus on what you really like,” she says. “Think about quality, not quantity, for resume builders.”

Find out more about Camille, and other recent Westminster graduates, in the Summer 2015 issue of Leadership Magazine.