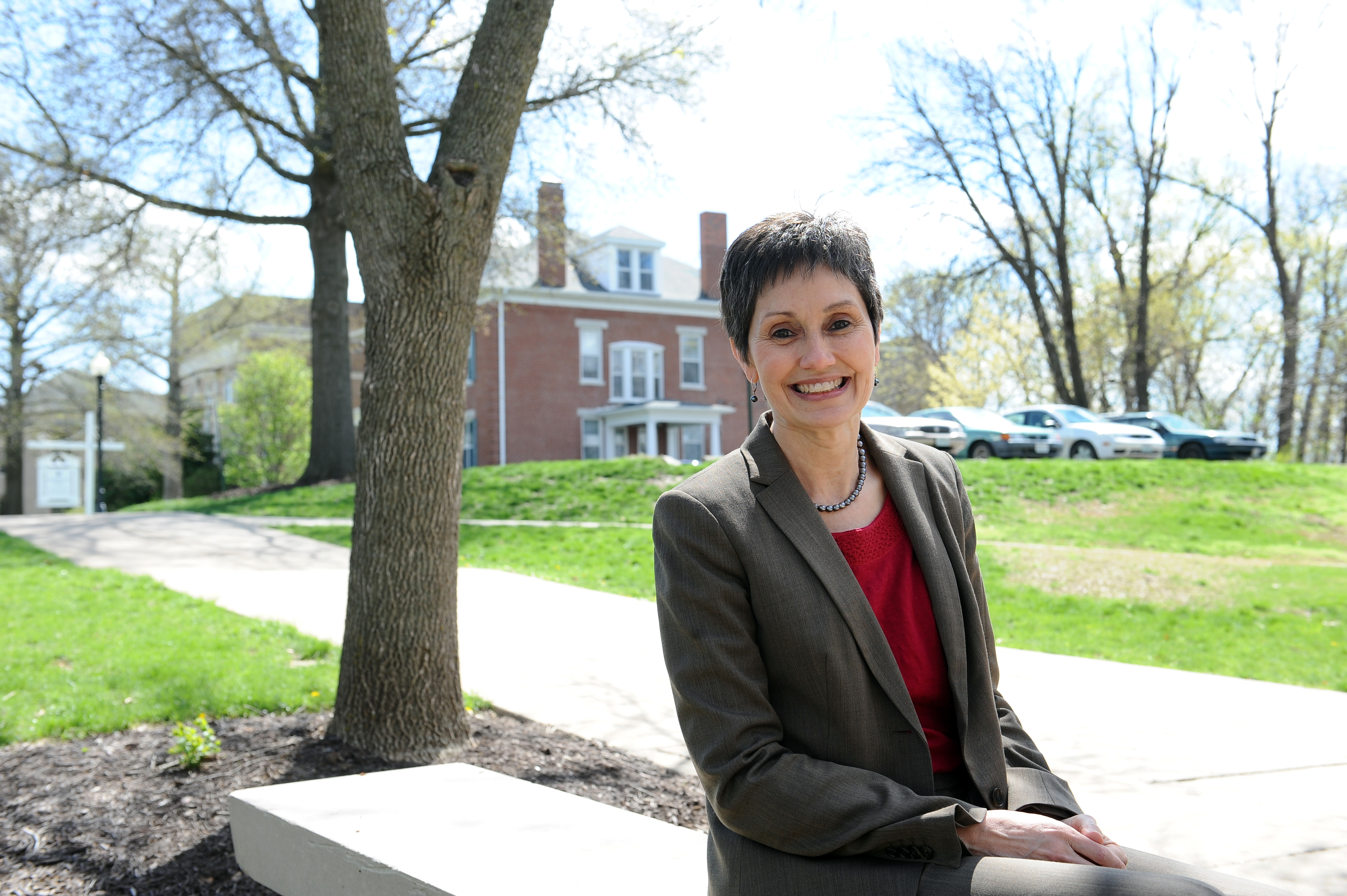 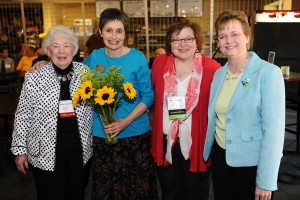 Making a career at Westminster

She joined Westminster’s faculty in 1991 to teach English and coordinate the “Writing-Across-the-Curriculum” Program which helped English majors add valuable minors and certificates to their degrees. Dr. Perry has always felt a deep commitment to helping her students customize their experiences at Westminster.

After coordinating the WAC program and directing the Writing Lab for five years, Perry started teaching English full-time at Westminster. Since then she has served as the English Department Chair, as the sponsor for Sigma Tau Delta (the English honorary society), as a supporter of the Women’s and Gender Studies program and the Remley Women’s Center, as a host for international students, and as an advocate for study abroad.

Leadership by lifting others

Dr. Perry says if it weren’t for the great leadership she has seen at Westminster College from President Forsythe, she wouldn’t be where she is today. He inspired her by helping her discover strengths she didn’t know she had; it was through his counsel that Dr. Perry realized she could be successful as the Dean of Faculty. She strives to emulate that same leadership in her current position. Perry feels her greatest ambition as Dean of Faculty is to encourage the amazing faculty at Westminster.

“It’s rewarding to see what incredible people we have here,” Perry says. “The role of Dean of Faculty is to make other people successful, and if I’m doing my job right there shouldn’t be anything I need to take credit for.”

From editing books with students to encouraging faculty every day to be their best – there is no doubt that Dr. Perry has and continues to have a lasting impact on Westminster’s community of faculty, staff, students, and alumni.

Colleagues and past students reflect on Dr. Perry’s impact

Carolyn has been so many things to me over the years, and in all her roles she was inspiring.  She was a passionate and caring professor who always had time to help any student that came to her door.  She led a Bible study for women who were not only preparing for careers but wanted to sustain and grow their faith. She was a friend who could be honest about the often unrealistic demands that women face.  She excelled in her career and become the first female Senior Vice President and Dean of Faculty at Westminster. She has accomplished all of this while also being a wife and mother and an active member of her church.  The women of Westminster have been fortunate to have Carolyn Perry to show them all they can achieve, and that it can be done while still maintaining their sanity.

One of my favorite things about Carolyn is how generous she is—with her time, her knowledge, her efforts. Her generosity facilitates so much success for others at Westminster. My success came when I learned that I love to edit. When Carolyn asked for my help, she added not only to my book knowledge, but to my life experience. She shared so much of her life with me—her home and family, academic opportunities, excitement about authors and ideas—that she is lodged there in my heart regardless of how sadly seldom we get to see each other. I am so grateful that she helps teach young adults that dualism is unnecessary and often incorrect. Beauty and brains, academia and religion, and strength and gentleness do all exist together. Right there in her.

I like to think of Carolyn Perry as my fellow traveler at Westminster, first as my colleague and collaborator in the English Department, then in her early years as Dean of Faculty, during which I served as Chair of the Humanities Division, and then after—and, throughout it all, my friend.   Her prodigious and inestimable gifts as a teacher continue to serve her well as Senior  Vice-President of the College and Dean of Faculty, both in her interactions with faculty and staff and also with– perhaps mostly with– students.  Here is one of my favorite images of Carolyn.  We’re driving to interview the poet Pattiann Rogers in Champaign, Illinois, and Carolyn is on the phone hiring an adjunct instructor in Math.   (No, she was not also driving the car.)  She seems to turn multi-tasking into an art form.  Let’s just call it Poetry in Motion.

When I first asked Dr. Carolyn Perry to assume the duties of Senior Vice President and Dean of Faculty, she modestly suggested that she didn’t see herself as a leader and was surprised that I would ask her to serve in this important role.  I disagreed, and boldly suggested that I had some experience identifying leaders; in my judgment, she was the right person for the job.  She has not disappointed us.

Carolyn’s leadership is grounded in her integrity.  Her service to our College evinces a profound commitment to Westminster’s mission and values, as well as a devotion to the well-being of everyone.  She balances collaboration and decisiveness with great skill, a necessary gift for an academic leader.  Humility and self-sacrifice characterize everything she does, and as a consequence, she has the trust and respect of the entire community.

Westminster College is blessed that she said “yes” to our call to service.

The Department of English has always been lucky.  Not a whole lot of students walk through the Columns thinking “I’m going to major in English.”  But year by year, we’ve enrolled our fair share and more of English majors.  That happens because of the kind of people we’ve hired.  They’re smart, whiplash smart.  They’re hard-working to a fault.  And, perhaps more than anything else, they’re empathetic.  They know how to talk with–and not to–people.  They know how to listen to students, how to find their ways into young lives and move students in positives directions. Sometimes it happens in talking about literature; sometimes it happens in talking about a student’s writing.  Sometimes it happens when students begin to see members of the Department of English as more than just teachers, as people who have thought and felt and struggled with the same questions that seem always new but are in many ways older than the pyramids.

Carolyn Perry is a prime example of that ability.

I came to know Carolyn better in the summer before she began to teach at Westminster.  As luck would have it, we both attended whamy kids called “Professor Camp” in Michigan that summer.  In those long ago days the college had a bus, and the two of us – neither knowing the other was going – discovered at our early-morning departure from Fulton that two members of the Department of English were part of that year’s “team.”

The bus wasn’t crowded; there were at least two seats for everyone and at first we took advantage of the space to spread out.  But at some point, wondering how Carolyn had been convinced to go – she had yet to walk into a classroom here! – I went forward and sat with her.  She was, as it turns out, as mystified as I at her selection.  But she agreed to go.  And that is exactly the point.  From the very start, Carolyn has unselfishly done what was asked of her, and more.  Too many hours, too many classes, too many students.  And yet, Carolyn pulled it all off with grace and aplomb.

From the start the students loved her.  Her classes were full, her office door always open.  She became a role model of the professional woman for the women students, a curious mixture of older sister and young mom.  On at least two occasions she read papers at professional meetings and published papers with young women students.  And with faculty, collegiality was Carolyn’s strong suit.  On one occasion she hosted a dinner to celebrate the granting of tenure to the person who was, without a doubt, the department’s most difficult member, hoping thereby to bring peace to the village.  Her actions are always above and beyond the call of duty.

When Carolyn was drafted, co-opted into the administration, those of us still teaching consoled ourselves.  The position was to be temporary; we all knew that.  And then, suddenly, Carolyn was Dean of Faculty for the duration and the Department of English succumbed to a wave of what Matthew the evangelist called “weeping and gnashing of teeth.”  Six times Matthew uses the phrase in his gospel, and the Department lamented Carolyn’s departure at least that many times.

As ever, the Department of English was more than lucky in finding a replacement for Carolyn, another young woman with amazing talents and gifts who has thrown herself into the work of Westminster in ways that remind me of Carolyn when she first began.  And yet, when I pause and think of Carolyn no longer teaching, what comes to mind – no surprise here – is a passage from Shakespeare:  “Give sorrow words; the grief that does not speak knits up the o-er wrought heart and bids it break.”

Perhaps some day there will be a triumphant return?