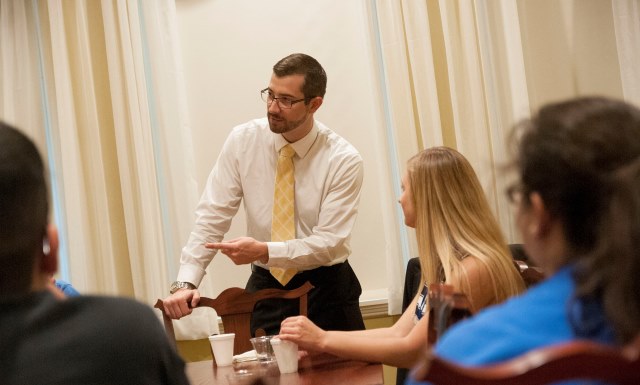 Above, Westminster alumnus Ryan Smith speaks to participants in the 2015 Westminster Institute for National Security about his role as a Diplomatic Security Special Agent for the U.S. State Department.

High school juniors and seniors can explore careers in intelligence and confront real-world crises this summer at the third annual Westminster Institute for National Security, July 23-26 on Westminster’s campus. This intensive, security-focused program offers high school students the option to earn college credit over the summer. The deadline to register is June 15.

During the four-day, three-night program, students will actively participate in hands-on problem solving and national security simulations to tackle the problems facing our world today. The Institute is led by national security expert and Associate Professor of Political Science, Dr. Tobias Gibson. Each day, students will explore two topics related to securities studies with dynamic faculty and security industry professionals.

This year’s courses will include the following:

Torture in the Twenty-First Century. Despite the fact that torture is condemned as a human rights violation, it is still widely practiced in the twenty-first century, even by countries that claim to be liberal democracies.  This course examines the history of torture, current laws and policies concerning the use of torture and enhanced interrogations, and the ethics behind attempts to justify the use of torture in “ticking time bomb” scenarios.  With Dr. James McRae

Show Me the Money! Accounting is often referred to as the language of business and is used to tell the financial story of an organization.  While the users of this information hope this story is always true, fraudsters use this language to rewrite a company’s reality for their own financial gain.  Students will use accounting in a simulation to uncover financial fraud and figure out “who dunnit?” With Professor Elise Bartley

Biological Crisis and Security. An Ebola outbreak in Africa, Zika virus in Brazil, tuberculosis in the prisons, drug-resistant bacteria in our hospitals, the threat of bioterrorism.  These and other stories appear in the news almost daily.  How do we make sure that one of these local biological crises does not become the next worldwide security threat?  In this session, students will take on one or more of these situations.  Students will each take the role of one of the interest groups that would be involved in the crisis or a United Nations representative of a key nation.  Through research on the internet, class discussions, and a series of role-plays the students will come up with a UN response to the crisis. Students are encourages to bring their own laptop, tablet, or other electronic device. Computers will be available for use during the research stages of this class. With Dr. Jeff Mayne

Islam and the Future of Global Politics. From the seventh century to today, the growth of the world’s third oldest monotheistic religion continues around the world. Its impact has affected education, politics, history, security, and literature. From the events of 9/11 to the conflict that has killed more than 200,000 in Syria resulting in a steady stream of Muslim refugees into the west, Islam continues to be in the headlines.  What is this major world force?  Who are its practitioners?  Why are there so many variations of Islam?  And, how does Islam relate to national security? This class will help students understand this major religion, its role in the world, and the difficult co-existence that it has had with western states.  With Dr. Kurt Jefferson

Intelligence Analysis. Students will use critical thinking skills to assess and analyze information and explore the process of turning information into actionable intelligence. With Spencer O’Gara, MIAC, Westminster College graduate.

Winston Churchill, Fulton, and the Cold War. On March 5, 1946, on the campus of Westminster College, Winston Churchill delivered a speech he called “Sinews of Peace,” commonly known today as the ‘Iron Curtain’ speech. Widely considered Churchill’s most significant post-World War II address, the speech outlined the security measures that would help the West win the Cold War. This course will examine original primary sources from the National Churchill Museum collection, including a rare draft of the ‘Iron Curtain’ speech. With Sandra L. and Monroe E. Trout, Director of the National Churchill Museum, and Chief Curator Timothy Riley