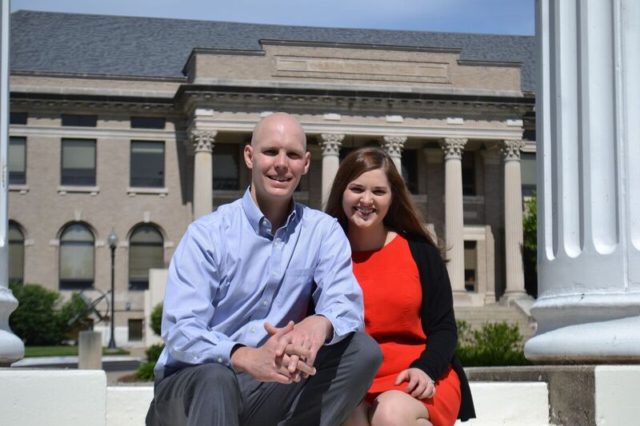 For many Westminster College alumni, a Westminster education shapes the direction of their entire life.  This is certainly the case with Nathan Moulton, Class of 2012, who received his college education beside his twin brother here, met his wife here, and received the academic preparation and mentoring which have now earned him a three-year residency at Duke University Hospital in Durham, NC.

Moulton has just finished his medical school course work at the University of Missouri where he received an award from the Department of Medicine as the top performing student in internal medicine.

A biology major, Moulton had the pleasure of going through college with his best friend, brother Andrew.  High school sports played a large role in the bond that grew between the twins.  On the baseball team, Nathan pitched, and Andrew caught.  On the gridiron, Nathan quarterbacked and Andrew received.

When asked about his Westminster activities, Nathan speaks highly of the leadership training and sense of professionalism he developed here.  His membership in Student Ambassadors and Delta Tau Delta Fraternity and the mentorship of student Nico Roberts, Class of 2010, all played significant roles in building his self-confidence.

In fact, Student Ambassadors is where he met his wife Erin.  Their first date was to the Westminster International Show, followed by dinner at Bek’s Restaurant in downtown Fulton.  They also served together in Order of Omega, a national academic honor society.

His passion for medicine was encouraged by Dr. Dan Jackson, ’04, who was his Chapter Advisor at Delta Tau Delta when Nathan was President of the fraternity.  He was not only able to go to Dan for fraternity advice but advice on medicine as well.  In fact, Dan wrote one of Nathan’s letters of recommendation for medical school, and residency and once Nathan was in medical school at the University of Missouri, he was able to do a rotation with him when Dan returned to the University as a Maternal-Fetal Specialist.

“Dan Jackson exemplifies what a great Westminster alumnus should be as he continues to help individual students, our fraternity, and our school as a whole,” Nathan says. “I owe him a great deal, and I hope to pay it forward.”

The Westminster experience is truly “all in the family” for this happy couple.  Along with his twin brother Andrew, Nathan’s sister Allison, Class of 2017, is currently a Westminster student and Andrew’s wife Alex graduated from the College in 2013.  Nathan’s wife Erin even has stronger Westminster ties.  She is fourth generation Westminster. Both her brother Tyler (2010) and sister Emily (2008) graduated from Westminster as well.  Her father, Frank Hunter, ’77, is a member of the Westminster Board of Trustees.

During his years at Westminster three professors stand out in Nathan’s mind as major influences.  As a freshman, he was in Professor Mike Amspoker’s class, and as Nathan describes it, “Amspoker raised the bar on what was expected of me and constantly demanded more.”  He also found Professor Jeff Mayne’s course to be challenging.  During his senior year he took Professor Dawn Holliday’s gross anatomy cadaver class, and she taught the class as if it were graduate level, so Nathan felt well prepared for medical school.

Nathan believes because of Westminster’s diverse community, students receive a richer educational experience than at other schools.  His advice?  “Do not be afraid of or try to silence people with different opinions, ideas, and beliefs,” he says.  “Westminster is an opportunity to challenge yourself.  Engage and learn from those experiences…become a well-rounded person.”

In the fall of 2012 Nathan started medical school at the University of Missouri and graduated this May after four years.  During this time, he was fortunate enough to work with a new role model, Stephen Witt, the Chief Medical Officer at University Hospital.

Nathan believes the key to his success and the wisdom he would impart to others is to “invest in yourself…work as hard as you can…and never lose focus.”

Recently, Erin and he returned to Westminster for a visit.  Meeting President Akande for the first time, Nathan found him to be “personable, positive, approachable, and focused.”  Nathan believes exciting changes are ahead for Westminster.  However equally exciting has to be the new life that lies ahead for Nathan and wife Erin in Durham, NC.  His goal is to earn a fellowship in pulmonary and critical care, and with Nathan’s background and drive, anyone who knows him would have to say that is just a matter of time.