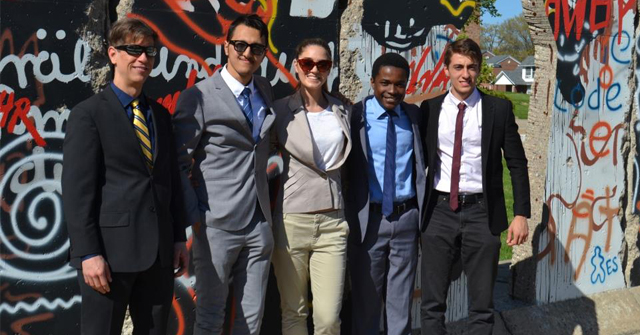 A team of five Westminster College students has finished fourth in the “Up to Us” competition, a national campaign dedicated to raising awareness of America’s long-term national debt and earned $2,500 in prize money for their student club that spearheaded the event.

The team from the student organization, Global Development and Progress (GDP),  finished ahead of more 66 other schools, including every Ivy League school in the competition, to bring home 4th place.

“This team worked relentlessly for months on this campaign, educating their peers about the country’s fiscal issues through their creative ideas,” says Dr.Straughn.  “Initiatives such as these are what makes Westminster great.”

The formal contest begins each year with an event called “My Two Cents Day” in late October, followed by a three-week period filled with events in February to engage the entire campus in discussions over the national debt and inequality.

In the  initial round of “My Two Cents Day,”  Westminster achieved the highest overall participation rate of any of the competing colleges and universities, reaching over 30% of the student body in a single day.

For the major round in February (Feb. 1-21), Team Westminster organized a series of well-attended campus events, which included a simulation game about resource investment and inequality and a faculty-student debate on defense spending in light of the national debt, which featured political science professor Dr.Tobias Gibson and Amelia Ayers from Ballwin, MO, ’16 vs. political science professor  Dr. John Langton and Kelli Albrecht, from Elk Creek, MO, ’17, and drew over 200 people.

Information booths were set up around campus  to directly engage students in discussion of the national topics.

Over the time period of the competition, the Westminster team was able to engage with approximately 70% of the campus.  They had an extended team of more than 30 volunteers and partnered with more than 20 campus organizations in different forms.

“It would be easy to underestimate Westminster because we are a small college in a small town but this worked out so well because all of our team members were very passionate about the project,” says Manandhar.  “If you work hard enough and if you team up with the right people who are passionate about the same causes you are, anything is possible.”