Students Immersed in Language and Culture of Argentina 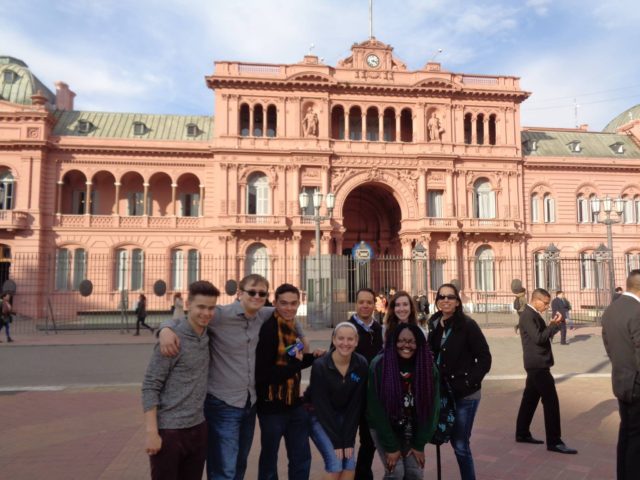 Westminster College students who studied the history, culture, and politics of Argentina last spring had the incredible opportunity to apply and expand their knowledge with a three-week stay in downtown Buenos Aires this summer.

Guided by Assistant Professor of Political Science Dr. Kali Wright-Smith and Dr. Enrique Salas-Durazo, Assistant Professor of Spanish, the group enjoyed the art, food, culture, music, literature, and sports that are central to Argentinian life.  The students also took daily Spanish classes from the professors at the Universidad Nacional de Lanus.  They spent one weekend in Uruguay, touring the capital city of Montevideo and spending a day in UNESCO World Heritage Site, Colonia, Uruguay.

Those fortunate Westminster students on the trip include: Gordon Allison, a senior from Fayetteville, AR; Isaac Coronel, a junior from Cashion, AZ; Lydia Creech, a sophomore from Republic, MO; Nicole Hall, a junior from Salem, MO; Nikita Thompson, a junior from St. Louis, MO; and Jalia White, a non-degree seeking student from Swansea, IL.

For Isaac Coronel, “This was the most important trip I have ever made in my life.”  Although he was born in the United States, his family is from Argentina but never talked about it.

“It is astounding to know about the triumphs and failures of my heritage,” he says.  “I can’t describe the excitement within me.  It’s a new music I have never heard.  Proud.”

The students enjoyed a variety of interesting experiences.  Hall enjoyed the beauty, vendors and performers of La Boca market as well as the Tango Porteno show which portrayed Argentina’s history and culture through dance.  For Creech, it was a visit to the Evita Peron museum, learning about Evita’s life and advocacy for women, children, and the poor.  Allison found the Gaucho Ranch fascinating with its “amazing similarities to the ranch and cowboy lifestyle so often glorified in the United States.”  Coronel was impressed with the Recoleta Cemetery.  “The art truly captured the beauty and representation of the country as a whole, especially when observing the graves of important figures like Sarmiento, Peron, and Evita,” he says.

Creech enjoyed the different foods they experienced.  She thought Argentina’s beef was “amazing,” and she tried cow stomach.  “There is also a traditional drink to Argentina called mate,” she recalls.  “People come together on the streets to stand in a circle to drink it.  Families will sit around a table at night and drink it for hours.  It brings people together.”  Hall also enjoyed the food but the “endless multitude of bakeries and cafes with endless temptations” attracted her.

All of the students found their ability and confidence in speaking Spanish improved as they were immersed in the language.

The poverty of the city haunted Coronel.  “To see children no older than six, placing items in our laps in order to purchase was very heartbreaking,” he remembers.

In spite of sights such as this, all the students felt the trip as Creech described it “was truly an experience of a lifetime.”  Hall says:  “My trip to Buenos Aires was magical.  I was surrounded with kindness of the people, the personality of the city, and the experiences of a foreign culture.  My first trip abroad could not have been any better.”

Allison summarized the experience this way:  “The land of Argentina is a nation hardened by tragedy, carved up through war and calamity, and melded together to form a nation that has no equal.  A country that refuses to yield to tragedy and instead works toward attaining a better tomorrow.”