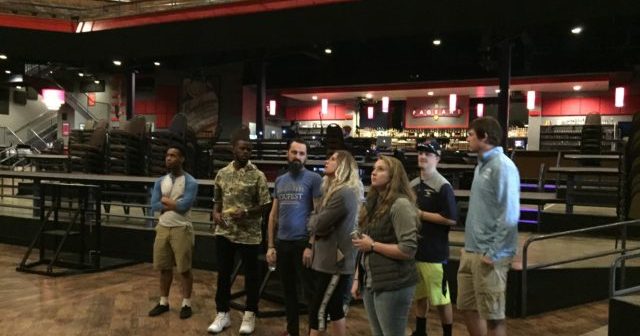 The Booking & Presenting Live Entertainment class (Business 300) and their teacher, Jack Croghan, Director of Sports and Entertainment Business Management at Westminster, got a behind-the-scenes tour of nationally renowned The Pageant Theatre in St. Louis Feb. 27.

The tour was conducted by “Kb” Ken Brown, the Pageant Theatre’s Production Manager and also Pat Hagin, co-owner of the Pageant (not pictured). The photo above shows the class with “Kb” (third from the left) on the floor of the Pageant observing the load-in of the artist NF. NF performed to a sold-out crowd that night.

Since opening its doors in 2000, The Pageant has built a reputation as one of the best concert venues in the country. Built as a concert venue from the ground up, The Pageant boasts optimal sight lines and exceptional acoustics. No matter where audience members sit or stand, they are always within 70 feet of the stage.

The Pageant takes its name from The Pageant Theatre – an old movie theatre originally located a few blocks East of where The Pageant now stands. The Theatre, built in 1915, was actually the first movie theatre to feature stadium-style seating in the St. Louis area.