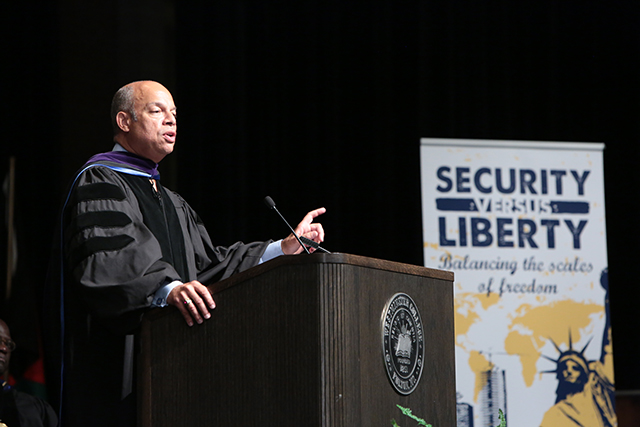 He also discussed other key issues, including the planned migration of Syrian refugees to the U.S., before nearly 1,000 college students, faculty, staff, and guests, during the prestigious Green Foundation Lecture – ending a three-day symposium titled “Security vs. Liberty: The Balance of Freedom” – in this mid-Missouri town, with a total population of about 16,000.

Johnson said Churchill’s “Iron Curtain” speech, delivered here in 1946, was considered by Churchill as his “oratorical high-water mark.” He had been asked to give the speech by then-President Harry Truman, who also delivered the Green Lecture at Westminster College five years later.

“Like many others, I am a fan of Harry Truman,” Johnson said, adding that he was a common man. “Few people would have deliberately picked him to succeed the great (Franklin D.) Roosevelt as the leader of the nation during a time of world war.

“But,” he continued, “Harry Truman is considered one of our great presidents. He rose to the occasion. He had the strength of his convictions, clarity of thought, and a bright compass to lead this country through a dangerous and transformational time.”

During his Green Lecture, Truman addressed the topic, “What hysteria does to us,” which Johnson said inspired his remarks on Wednesday. Truman delivered his speech in response to the rising fear of Communism in post-WWII and the Cold War, highlighted by what today is known as the McCarthy Era.

“In his usual plain and blunt language, Truman rebuked the specter of McCarthyism with the words, the ‘descendants of the ancient order of witch hunters have learned nothing from history,’” he said, adding that “the cause of freedom both at home and abroad is damaged when a great country yields to hysteria.”

Truman abhorred fear-mongering and those who tried to create hysteria for their own political benefit. “We must all act soberly and carefully, in keeping with our great traditions,” Johnson quoted Truman as saying.

“All of us in public office … owe the public calm, responsible dialogue and decision-making; not over-heated, over-simplistic rhetoric and proposals of superficial appeal,” he said, quoting Truman. “In a democracy, the former leads to smart and sustainable policy. The latter can lead to fear, hate, suspicion, prejudice, and government over-reach.

“This is particularly true in matters of homeland security,” he said.

Johnson urged the students to consider a career in public service, saying that while he served as a corporate attorney early in his career, his most rewarding time has been in the public service sector.

He explained in a Q&A session with reporters after the speech his department also is working to develop a screening or evaluation process for the nation’s planned acceptance of 10,000 Syrian refugees later this year and in 2016. Johnson did not discuss specific details, but assured the reporters his department will play a key role in the process.

Johnson, who also was awarded an Honorary Doctorate of Law by Westminster President Dr. Benjamin Akande, joked with the audience saying past Green Lecturers represented “an extraordinary collection of presidents, prime ministers, philosophers, rock stars and others.

“Years from now, when learned historians look at the list of Green Lecturers that includes the names Churchill, Truman, Ford, Bush, Gorbachev, Walesa, and Thatcher, they will ask: ‘Who the heck is Jeh Johnson?’’’