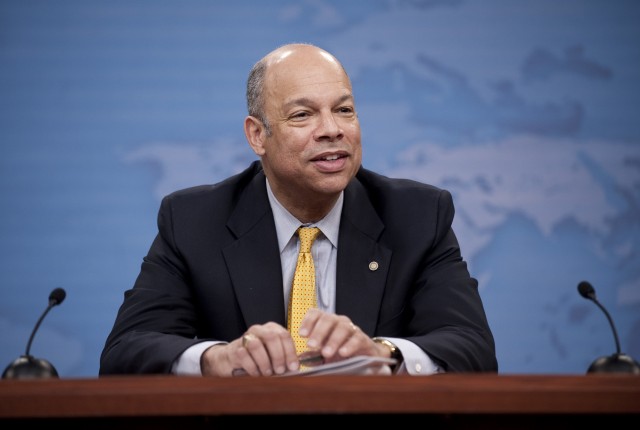 The man responsible for all federal agencies that keep America safe will be the keynote speaker Wednesday, September 16 at the Hancock Symposium on the campus of Westminster College in Fulton, MO.

U.S. Homeland Security Secretary Jeh (“Jay”) Johnson will deliver a Green Lecture at 1:00 p.m. that day in Champ Auditorium.  The public is invited to the free lecture.

Secretary Jeh Johnson was sworn in as the fourth to hold his office on December 23, 2013.

Established through the combination of 22 federal agencies in 2002, the U.S. Department of Homeland Security oversees efforts to guard against terrorism, secure and manage America’s borders, safeguard and secure cyberspace, build resilience to disasters and provides essential support for national and economic security in coordination with other authorities.

Fulfilling these responsibilities requires the dedication of more than 240,000 employees in jobs that range from aviation and border security to emergency response and from cybersecurity analyst to chemical facility inspector.

In addition, hundreds of thousands of other people from across the federal government, state, local, tribal and territorial governments, the private sector and other nongovernmental organizations are responsible for helping the Office of Homeland Security execute their missions.  These include people who regularly interact with the public, who are responsible for public safety and security, who own and operate our nation’s critical infrastructures and services, who perform research and develop technology and who must keep watch, prepare for, and respond to emerging threats and disasters.

The nature of Homeland Security is that no news is good news,” says Secretary Johnson.  “No news sometimes means somebody got interdicted at the border or getting on an airplane or someone was arrested providing material support to terrorism.  Homeland Security means very often something you never hear about.”

Eleven days after the September 11, 2001, terrorist attacks, President George W. Bush established the Office of Homeland Security with former Pennsylvania Governor Tom Ridge appointed as its director.  The function of the office was to oversee and coordinate a comprehensive national strategy to safeguard the country against terrorism and respond to any future attacks.

On November 25, 2002, the Office became the Department of Homeland Security (DHS) with the goal of consolidating all the U.S. executive branch organizations related to homeland security into a single Cabinet agency, placing 22 agencies under its authority.

According to Peter Andreas, political science and international relations professor at Brown University and a border theorist, the creation of DHS represents the most significant government reorganization since the Cold War.

During Secretary Johnson’s tenure he has brought the department to full staff, improved the coordination and dissemination of threat information and improved morale.

Prior to heading the DHS, he led the more than 10,000 military and civilian lawyers of the U.S. Department of Defense as General Counsel.

He graduated from Morehouse College in 1979 and received his law degree from Columbia Law School in 1982.

Secretary Johnson is not the first Director of Homeland Security to speak at Westminster Secretary Michael Chertoff spoke to the Westminster community in October 2007.

Established in 1936 as a memorial to John Findley Green, a St. Louis attorney and Westminster graduate (1884), the Green Foundation Lectureship is given by “a person of international reputation” to promote understanding of economic and social problems of international concern.

The topic of this year’s upcoming Hancock Symposium is “Security vs. Liberty: Balancing the Scales of Freedom.”  Presenters and discussion will center on how America maintains a balance between championing liberty and preserving security. Ever since 9/11, the demand for security has compelled America to take a serious look at how increased security affects individual freedoms.

For more information on the Hancock Symposium, go to http://Symposium.Westminster-MO.edu