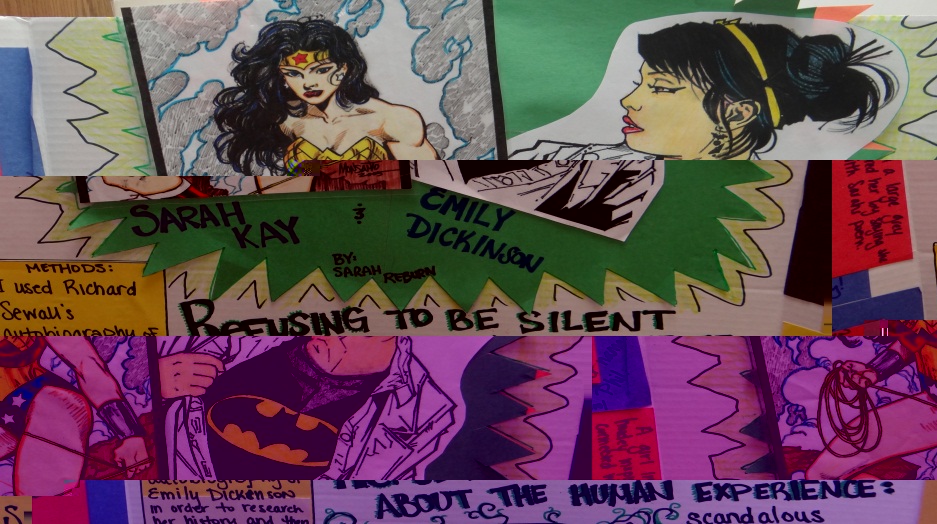 Below, Assistant Professor of History Dr. Cinnamon Brown provides a follow-up to a previous post about her favorite course, Scandalous Women in History.

In a previous blog, I talked about my favorite course, Scandalous Women in American History.  This class not only allows me to talk about some of my heroes, but also women who, through bold actions and fierce words, challenged traditional gender roles and the place of women in American society.  Besides trying to understanding the evolving nature of words such as “scandalous” and “deviant,” this course has exposed my students and I to the many dynamics behind societal expectations and judgments placed on women.

Last week, my students presented their posters – the culmination of their exploration of two women in American history that they deem scandalous – to their classmates.  Each day a certain number of students set up their posters while their classmates looked at their work and asked relevant questions.  I also gave each student a worksheet with several questions to fill out as they observed these posters.  One of these questions asked students to compare their definition of scandalous to ones provided by their classmates.  I also asked students to write down anyone that they were surprised to see among the list of scandalous women.  Hands down many of my students were shocked when one student, Haylee Rethman, chose Rosa Parks and Oprah Winfrey as her scandalous women.

Today, I think it is very easy for people to assume that scandalous is a negative label used to demonize the words and actions of women.  However, Haylee found that scandalous activities can include those that challenge the status quo to have a positive effect on women and society.  In her work she found that black women (due to their race and sex) often face more challenges than men and their white female counterparts.  She argued that despite these obstacles, black women such as Parks and Winfrey defied the odds against them and helped to blaze the path for not only women but the African American community. 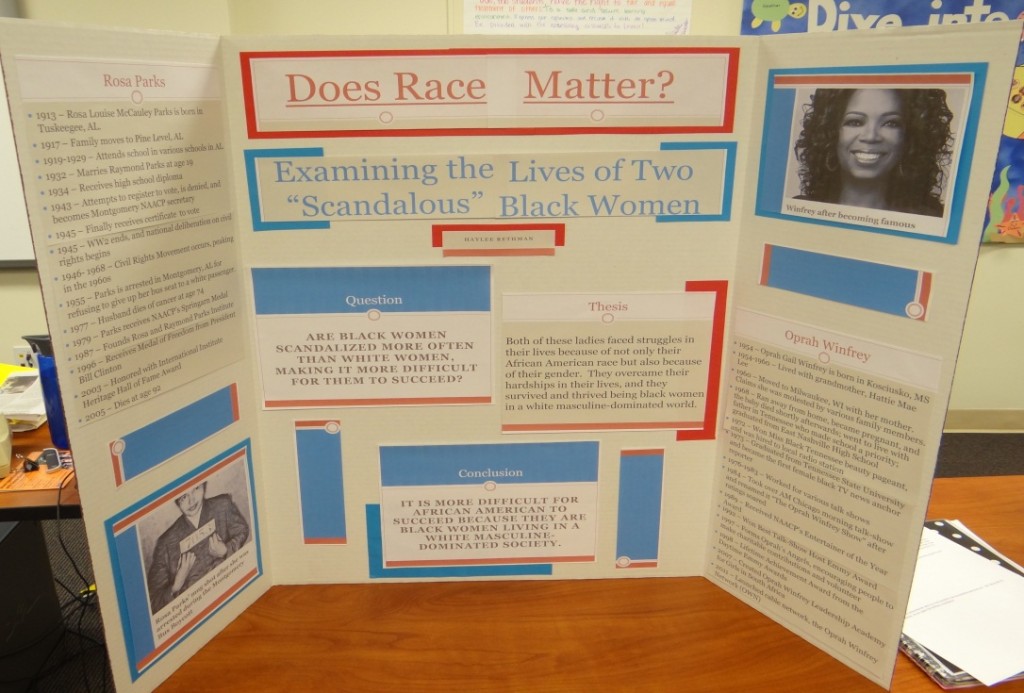 Other projects also illustrated how scandalous actions by black women have had positive effects.  Mercedez Clewis did her project on female black entertainers Josephine Baker and Nichelle Nichols (Lieutenant Uhura on Star Trek).  She found that at a time in American History when black women were often defined by negative stereotypes such as the “Jezebel” and “Mammy” figures, these women provided a new image of black women in entertainment.  Through her performances and service to France in World War II, Baker showed that black women could be strong and independent.   By playing a leading role on Star Trek, Nichols’ shattered the common television depiction of black women as merely maids and nannies.  These two female black entertainers helped promote a more empowered image of black women in the media. 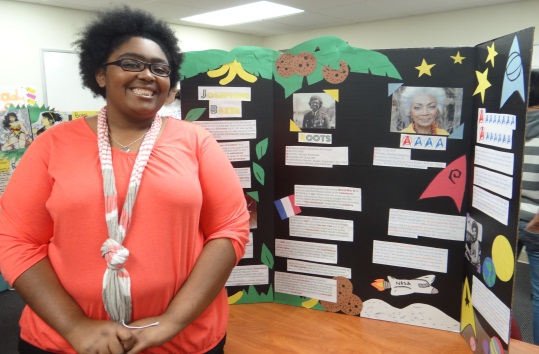 This new image of black women has also affected the modeling world as Caroline Abraham learned.  She identified supermodel Naomi Campbell as a black woman continuing these efforts.  Through her long career in modeling, Campbell has often been the first black model featured in certain runway shows and on magazines covers.  Currently, she helps run an organization, supported by many celebrities, to urge designers and publishers to fix the underrepresentation of black women in fashion and publishing.  Through Mercedez and Caroline’s projects, it is clear to see that scandalous can be shaped by race and ethnicity.  More importantly, they demonstrate that scandalous does not always have to be a bad word.  Women often engage in scandalous activity to challenge societal constraints that often oppress them. 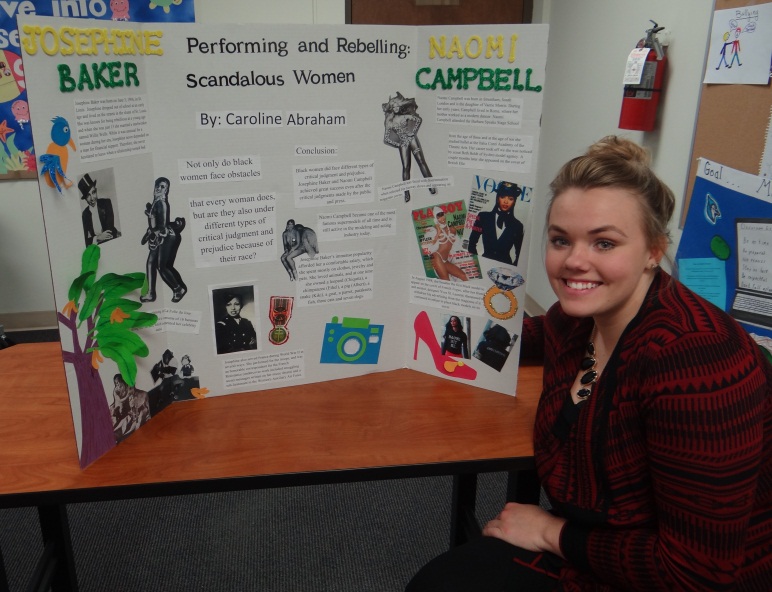 Another question that I asked my students to consider as they observed each other’s work was if they saw commonalities between many of the chosen scandalous women.  Almost every one of them identified the media as having some impact on how society judges and labels women.  This was certainly the

case for Andrea Kiser who chose two female criminals, Bonnie Parker (of Bonnie and Clyde fame) and Aileen Wuornos (the first female serial killer executed in 2002), for her project.  Andrea found that the media tended to depict these two women as cold-blooded killers.  Newspapers, for instance, loved to print pictures of Parker smoking a cigarette with a pistol strapped to her leg.  Just last week Lifetime featured a new movie about Bonnie and Clyde that made Parker out to be a blood-thirsty seductress.  The same has been true for Wuornos who not only garnered plenty of negative media attention but found her life made i

nto a major motion picture called Monster.  Andrea, however, found that these women were much more dynamic than their silver-screen renditions.  Both women committed crimes for the people that they loved.  This is not to excuse their criminal activities, but by taking a closer look at their upbringing and relationships, one finds a much different woman than the one that the media portrayed.  Through this project, we can learn that there is often a stark difference between the image and reality of a scandalous woman. 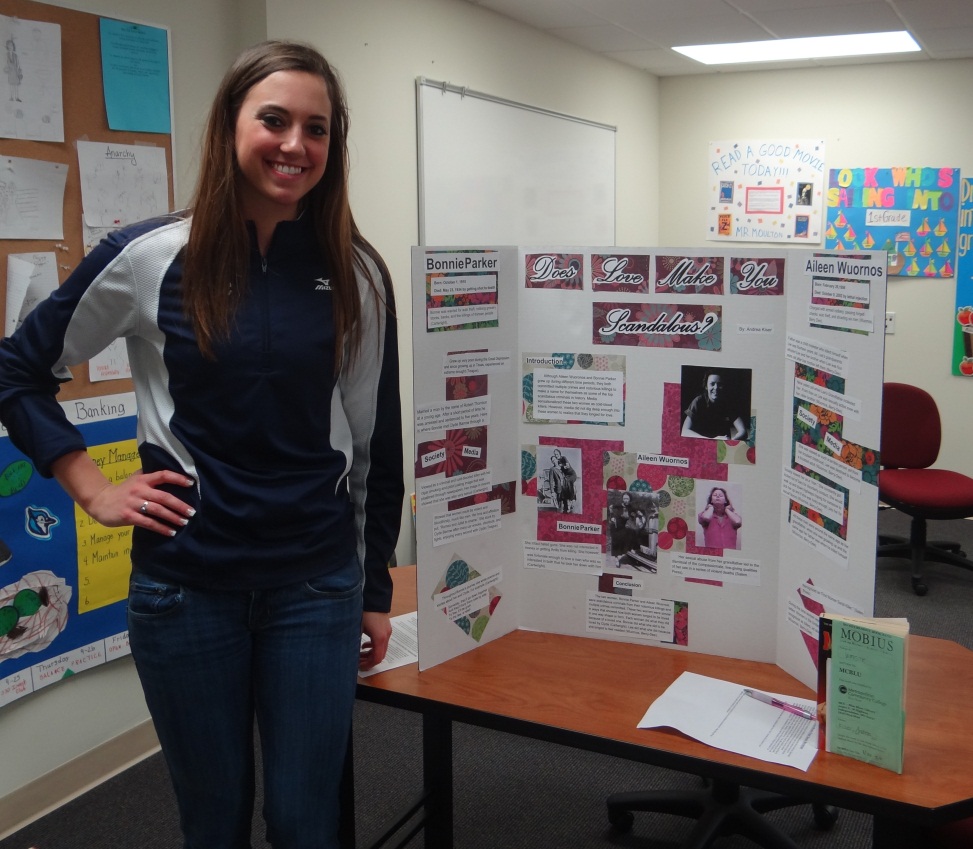 Two others students also noticed this dichotomy between image and reality in their projects.  Kate Woodward, for instance, explored two women that tried to reinvent themselves but could not quite escape the initial label of scandalous.  In her research on Katherine Anne Porter (famous writer) and Angelina Jolie, Kate found that once a woman is deemed scandalous by the media, it is very difficult for her to transcend that label.  Jolie at a young age gained attention for being a very sexual and strange young woman with her bisexual activity and obsession with knives.  Today she is a working mother and a UN Ambassador, yet the media continues to fixate on her earlier “indiscretions” that many called promiscuous and rebellious.  Winnie Younger found the same phenomenon when she compared Hetty Green and Angelina Jolie.  Like Kate, Winnie found that Jolie has had a hard time getting rid of her scandalous title despite the many changes in her life.  She found the same curse besetting Hetty Green who many referred to as the “Witch of Wall Street.”  While many young girls played with dolls, Green played with money and became a prominent stock broker in the 1930s.  She not only controlled Wall Street but even ousted her husband out of his own business.  At a young age, Green struck many as scandalous due to her plain dress, disinterest in marriage, and obsession with money.  Despite her later success in business and giving into traditional roles as a wife and mother, she could never shake being a scandalous women and the “Witch of Wall Street” in the media. 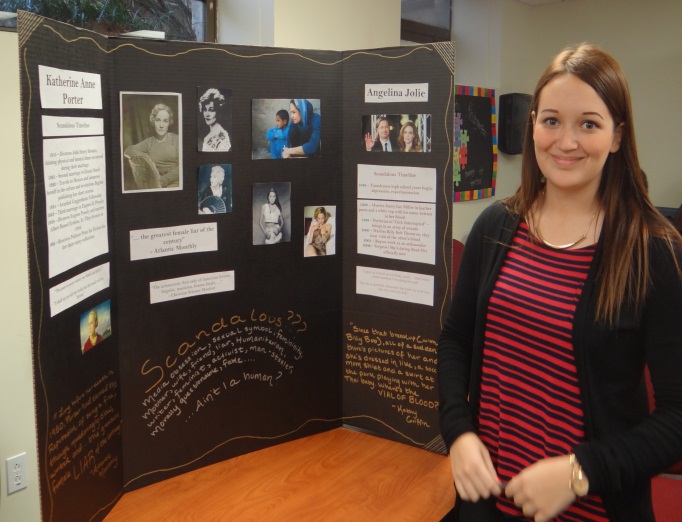 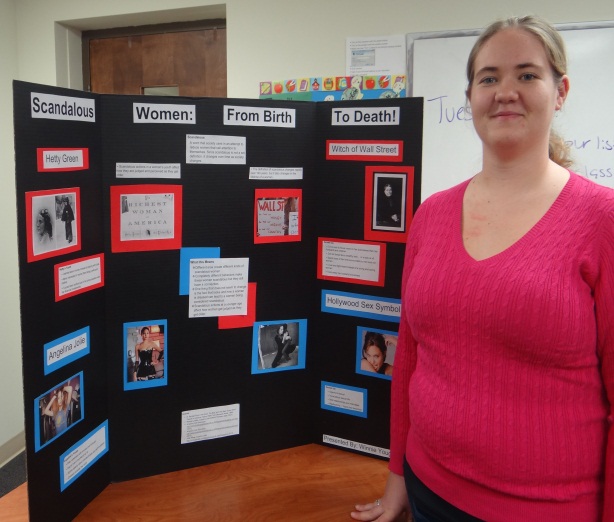 Through these projects it is easy to see that the media plays a large role in scandalizing women.  Yet, as some of my students discovered, the media has also provided a vital outlet for women to push boundaries.  Jenna Teter chose journalists Lois Long and Helen Gurley Brown as her scandalous women.  Lois Long, a writer for the New Yorker in the 1920s, used her weekly columns to bring the “Flapper Girl” to the masses.  From cataloguing her beauty routine to discussing the clubs she patronized that week, Long provided a guidebook to any woman who wanted to dress, act, and party like a Flapper.  Nearly forty years later, Helen Gurley Brown used her book Sex and the Single Girl as well as her position as editor of Cosmopolitan, to invent the “Cosmo Girl” that was far from the typical June Cleaver housewife of the 1950s.  The “Cosmo Girl” was single, independent, and ambitious.  Both Long and Brown used the media to propagate a new image of American women. 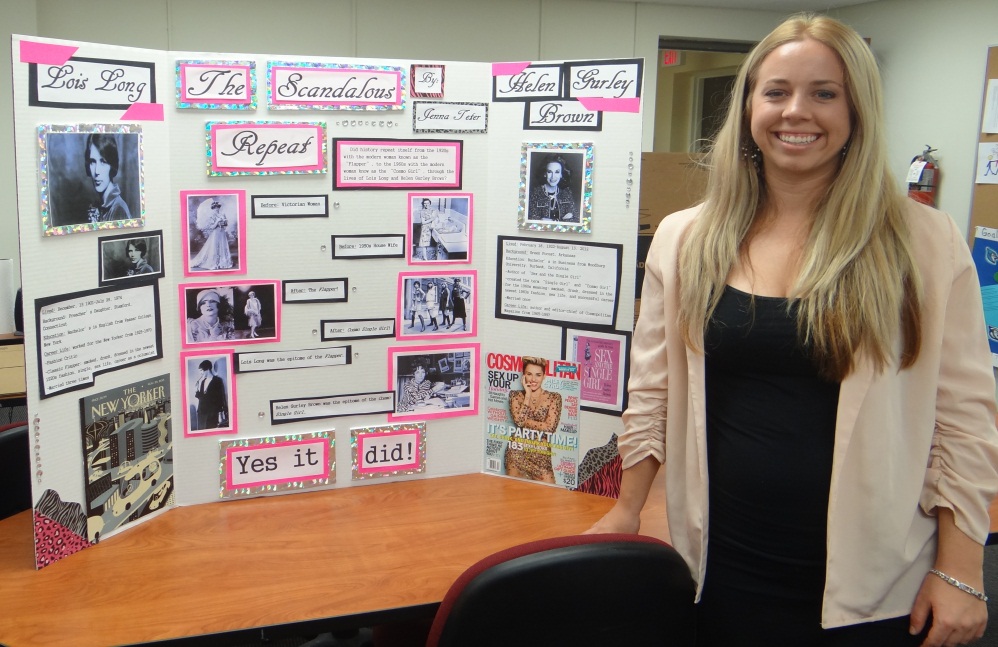 Lauren Hughes also found that some women used the media as a means of liberation.  For most of American history, the ideal woman was one that displayed the virtues of piety, purity, domesticity, and submissiveness.  This “Cult of True Womanhood” placed women firmly in the home.  Journalists Margaret Fuller and Martha Gelhorn refused to live by this cult and traveled abroad covering heinous wars from Italy to France.  Through their travels and writings they not only exposed the cruel nature of war to many Americans, but their work gave them purpose and an identity outside of the kitchen and home.  Moreover, they provided inspiration for other women to free themselves from the confines of the Cult of True Womanhood.  Although many of my students found that the media had a negative impact on women, some found that women often used the media as a means of carving out a more public space. 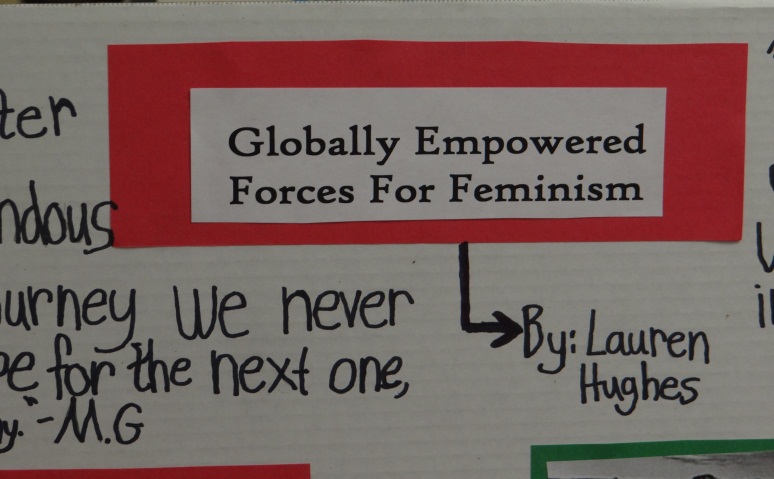 In my first blog, I discussed the inspiration behind this course.  It came largely from a quote by Laurel Thatcher Ulrich who proclaimed that “Well-behaving women seldom make history.”  My students and I have constantly assessed why scandalous women often fill history books.  By the end of this course, I think we finally settled on our answer.  Scandalous women make history because their actions, words, and ideas change history.  Every time a woman defies gender expectations and challenges inequality she promotes change.  Often this change requires radical action and does not come immediately.  Several student projects illustrate this point.

For instance, Abby Stokes examined how radical actions can bring radical change in highlighting the lives of suffragist Alice Paul and gay rights activist Jean O’Leary.  Paul gained fame as the founder of the National Women’s Party in 1916.  Through her willingness to use radical tactics, from picketing a wartime president to hunger strikes, Paul made national headlines that forced President Woodrow Wilson to make women’s suffrage a priority.  Jean O’Leary, much like Paul, often reverted to radical action when she felt that lesbians were underrepresented in the Gay Rights Movement.  From her political involvement to co-founding National Coming Out Day, O’Leary gave lesbians a voice.  Both Paul and O’Leary often faced scrutiny from not only the public at large but among their peers, yet their dedication and bold actions have gained women the right to vote and have helped to promote equality for all people in the United States.

I think all of my students found that their chosen scandalous women, along with the many women we discussed in class, were pioneers that somehow improved the lives of modern American women today.  When I think of some of the ridicule and punishment many scandalous women have received over the course of history, I feel quite humbled by their bold actions, bravery, and passion.  I can only hope that their struggles will inspire the next generation of women and men to challenge the injustices and inequality that still exist in our world.

My class! (My two male students happened to be gone on this day)

It has been such a pleasure to teach this course.  I had a fantastic group of men and women who willingly joined me on a journey through American History.  It would be impossible for me to discuss all of their amazing projects and class contributions.  I will instead add a few pictures here at the bottom to give you a sense of the amazing work they have done.  You will also see pictures of the posters from students I wrote about in my last blog including Jorden Sanders, Shauntay Larson, Kari Lenz, and Ember Vitale. Again for those students who I did not have time to discuss, thank you for your work.

I find myself saying to anyone who will listen that I have the best job in the world.  Where else can I teach about amazing women all day to a group of such wonderful people? 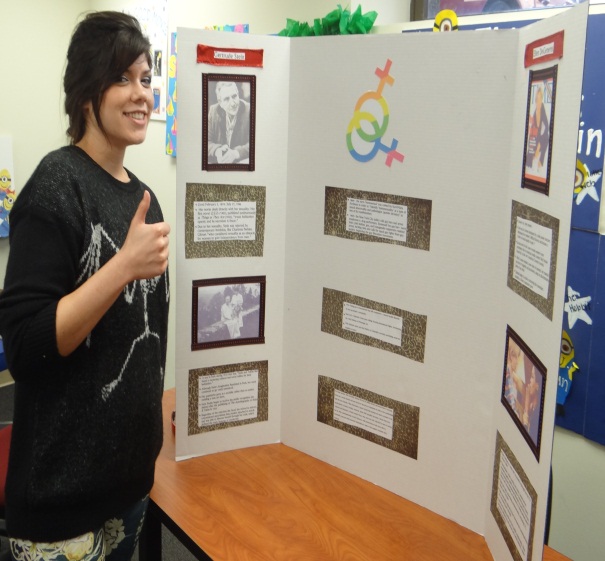 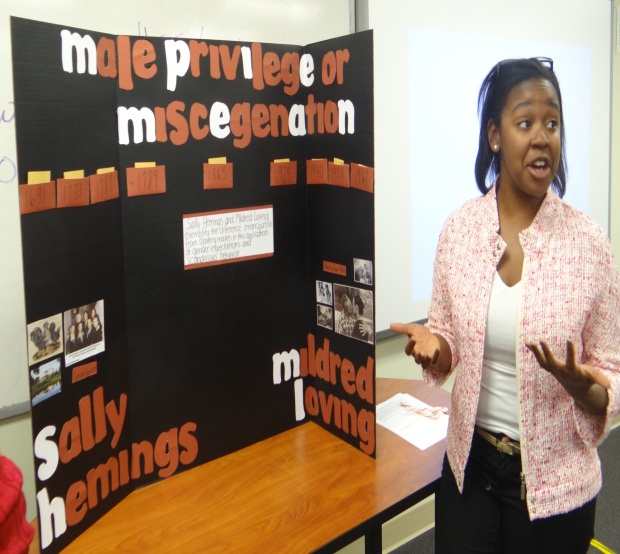 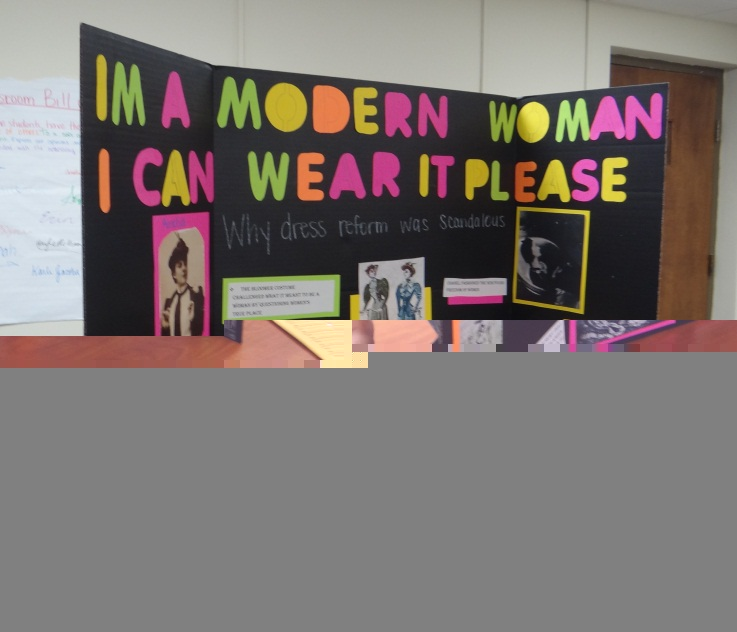 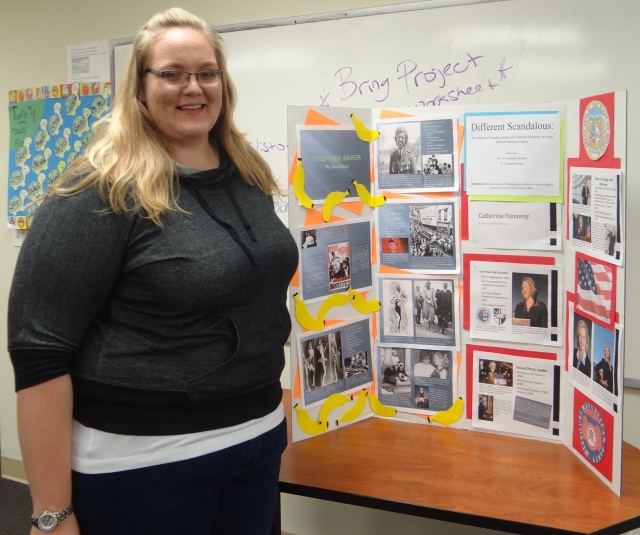 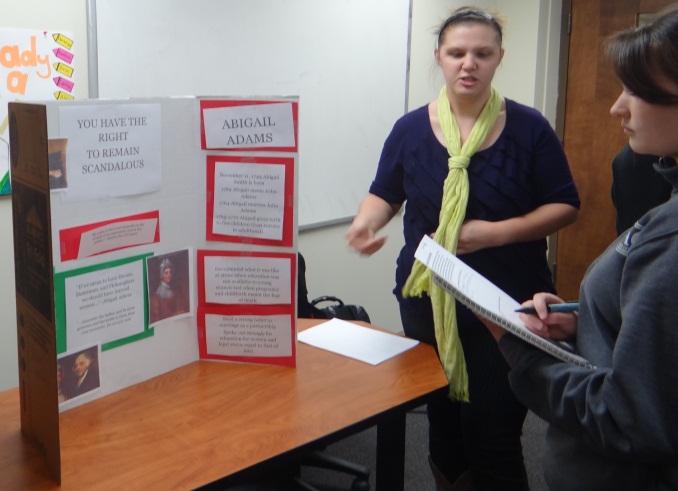 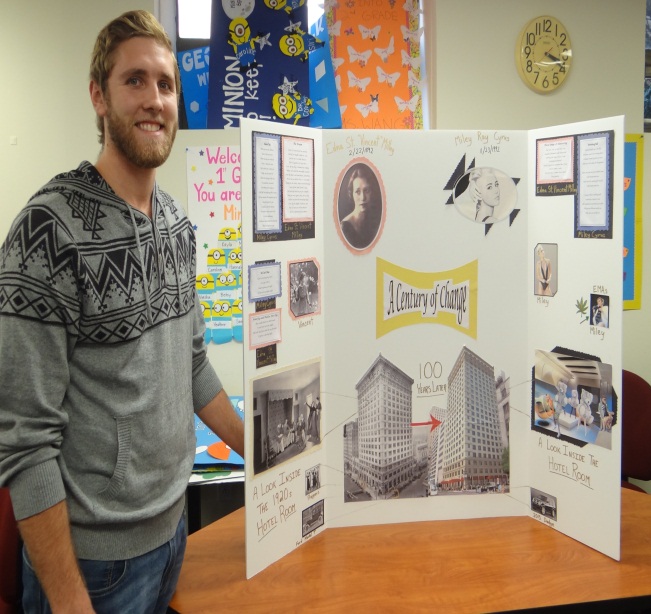 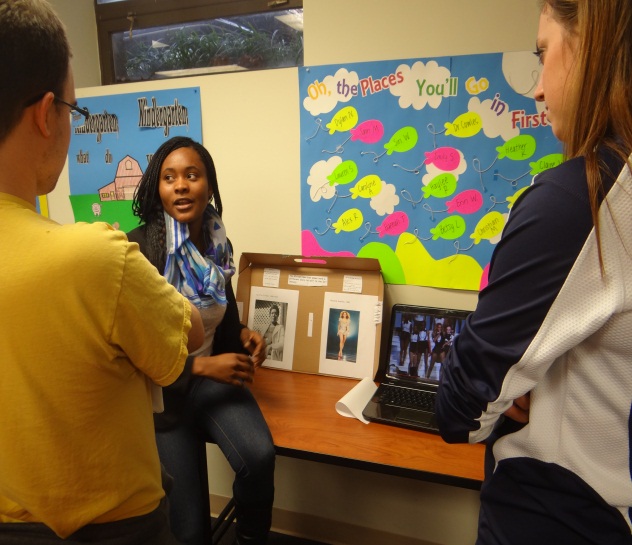 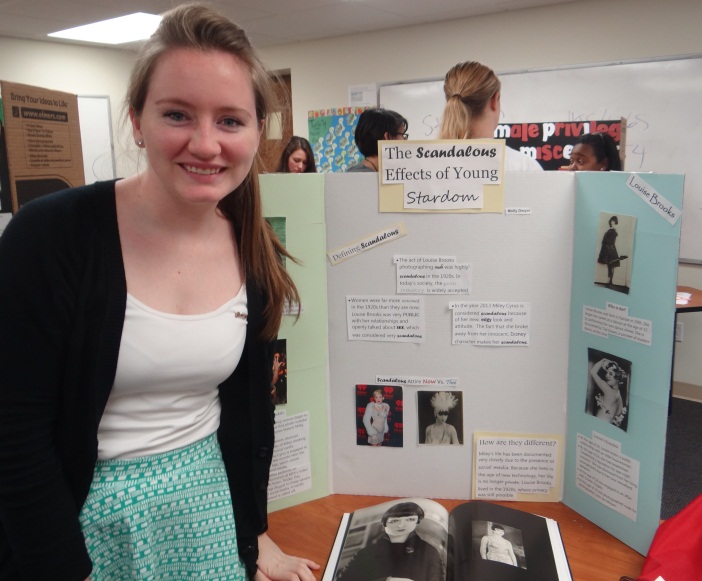 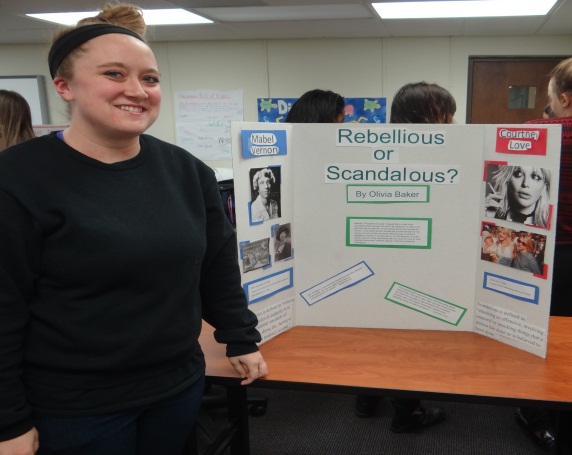 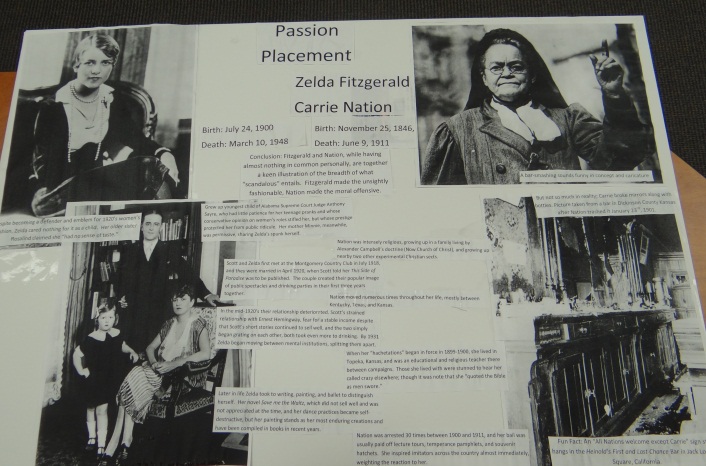