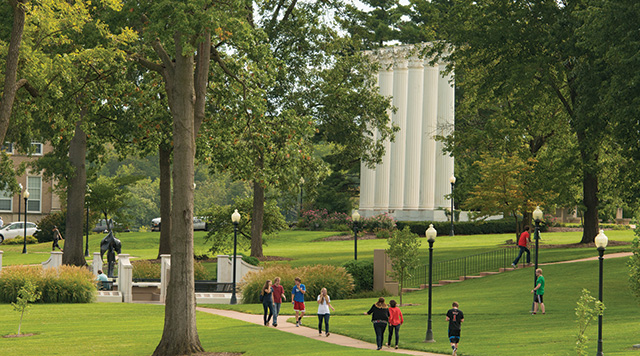 The 12 students of Westminster Communication Professor Keith Hardeman’s public relations class performed the duties of real-world practitioners this semester by conducting public relations campaigns for three campus organizations: the Athletics Department, the Campus Activities Board and the Information Technology department. During their campaigns, students announced their clients’ positive accomplishments in press releases and publicized their social media information and events on flyers. They gauged their campaigns’ effectiveness by analyzing before-and-after satisfaction surveys sent to students and professors. At the end of the campaign, they shared their results in group oral presentations.

Student Annie Mulvey, who said she “hopes to go into” public relations, stated that her work on the athletics campaign allowed her to “experience firsthand what it will be like to work as a practitioner for a client.”

“This campaign taught me planning, group dynamics, and techniques that will be invaluable to me in the future,” she said.

Mulvey and her group members, Emily McCann, Jim Malven, and Sydney Attebery, found that athletic events were poorly attended and planned to address this problem through social media. According to surveys they conducted, most students do not attend games because they do not know when they are scheduled, and most students learn of game times through social media. Therefore, the group advertised the athletic department’s social media information on flyers that they placed in high-traffic areas throughout campus. At the end of the campaign, three of the four sites had increases of 14 or more individual followers.

Tenzin Tsuendue, Savannah Hanning, and Allison Frisella worked on the Campus Activities Board campaign and publicized the students who put on various campus events ranging from comedians to archery tag. Tsuendue’s group advertised events on posters and on social media, creating a promotional video for the organization, and writing press releases about how the group engages students. The practitioners concluded that CAB-sponsored event attendance increased during the campaign and that students became more knowledgeable about the organization.

A business administration major, Tsundue said that he desires to be a marketing professional for a large company before owning his own company and that he will “definitely apply” the skills he acquired in Hardeman’s class.

Karley Long, Nick Moore, Brian Sellenriek, and Peter Plakorus worked with the IT department. Long said that “our goal was to make IT not only an office but a group of men in the Westminster family.” They attempted to do this by working to create a flyer with personal information about the IT department workers as well as a pamphlet that gives instructions that could help new students with common issues such as connecting to Wi-Fi or printing.

In addition to working with these organizations, students learned about public relations history and practices as well as how to manage crisis situations. They also gave an individual speech about an interesting facet of Westminster and gave two group speeches, including the campaign presentation.

“’One of the lessons I repeated throughout the semester was that fire prevention is much easier than firefighting,” Hardeman said, citing April’s United Airlines botched passenger incident as a completely avoidable PR crisis.

“We’ve seen the recent PR disaster with United Airlines and how the company’s stock nosedived simply because a handful of people made silly, terrible mistakes with very foreseeable outcomes, and those people’s actions spoke negatively about the entire company,” he said.

Karley Long commented that she thought the campaigns provided the class a very positive learning experience because “we’re all working together to make Westminster a better place, and this is a huge part of the process.”