President Forsythe Guest Lectures at a Class on the Berlin Wall 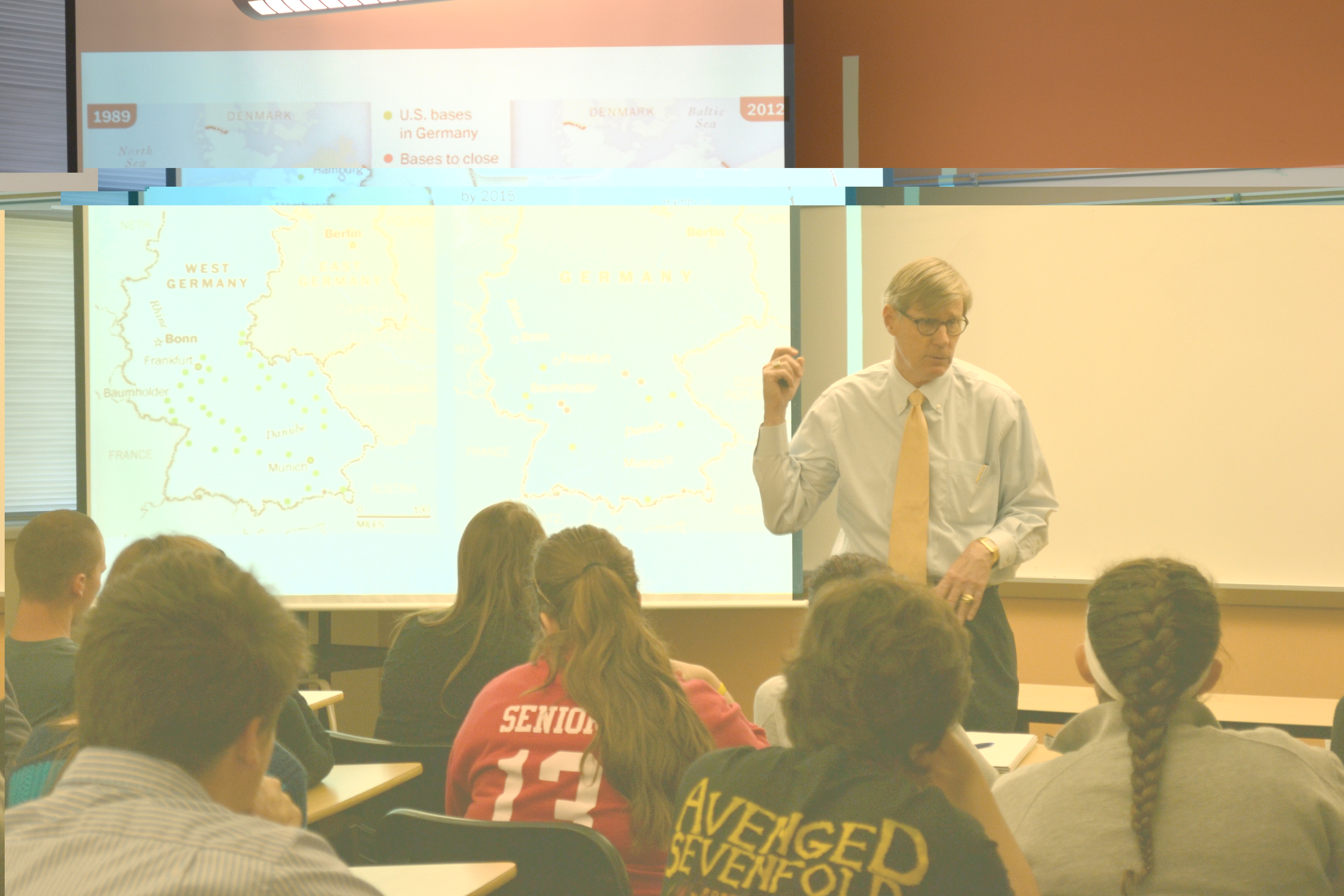 A freshman seminar on the Berlin Wall recently welcomed a very special guest lecturer: a former U.S. Army officer who was stationed in Berlin during the early 1970s who also happens to be the president of Westminster College today.

During his fifty-minute talk, President George B. (Barney) Forsythe shared his experiences as a young 2nd Lieutenant and, later, Company Commander stationed in Berlin from 1971-74.  He was accompanied in Berlin by his wife Jane, who gave birth to their first child (a daughter) at the U.S. Army base hospital during that time.

President Forsythe used visual aids to take his audience back in time, with slides depicting key features of Cold War Germany and divided Berlin, including the U.S. base where he was stationed, Checkpoint Charlie (where U.S. and other Allied forces crossed between East and West Berlin), Kurfürstendamm, Spandau prison, and the Berlin Wall itself.

In one of the more gripping moments of his talk, the Westminster President related how he overcame his nerves and held his ground when he encountered convicted Nazi war criminal Rudolf Hess on a pathway inside Spandau prison, where American troops were taking their turn guarding its sole inmate.

Another highlight was an episode in which President Forsythe got to know a young Soviet officer during the changing of the guard at Spandau Prison.  They later met for lunch with their wives at a restaurant in East Berlin, where they talked about their families, seeming to forget the Iron Curtain that divided them.

President Forsythe also related a particularly suspenseful story about being the guest at a party hosted by the British.  In the wee hours of the next morning, a NATO readiness alert was called; young Forsythe missed the call but his British friends went on alert and then returned to finish the party.  Missing the alert could have cost the 22-year-old officer his career, but his company commander was willing to give him another chance.  “It was a lesson I would never forget,” the speaker noted.

Drawing on his experiences while stationed in Baghdad in 2003, President Forsythe concluded with reflections on the problem of invisible barriers, such as religion, ethnicity, language, politics, and especially trust, which he recognized as potential obstacles to stabilizing Iraq after the U.S. invasion.

Afterward, students said the President’s personal recollections and candid tone helped them understand the human dimension of a crucial period in world history.  As Paige Harris, a freshman from Laddonian, Missouri, recalled: “President Forsythe gave us very rich information about what it was like to be a soldier in Berlin during the Cold War and helped us keep sight of the human element involved instead of just [focusing on] political policies.”

Amanda Kiso of Jefferson City, Missouri, concurred:  “I thought President Forsythe’s visit was awesome.  It was interesting to learn about [divided] Berlin from someone who actually experienced it and how the Wall impacted how he lived.”  Ayush Manandhar, a native of Nepal, likely spoke for the class as a whole in stating: “I think the entire Westminster Community is really lucky to have someone like President Forsythe who has those kinds of experiences [to share].”

“President Forsythe was the ideal guest speaker to help students connect with Cold War history on a personal level,” notes Jeremy Straughn, who teaches the Berlin Wall Seminar.  “His presence in our class speaks volumes about the unique learning opportunities Westminster has to offer.”  Dr. Straughn is a Visiting Assistant Professor of Transnational Studies at Westminster, where he also directs the Office of Study Abroad & Off-Campus Programs.

Straughn says the seminar topic was inspired by Westminster’s rich Cold War heritage as the site of Churchill’s “Iron Curtain” speech, the National Churchill Museum, and the Breakthrough Monument (which features eight panels from the original Berlin Wall).  Formally titled “Divide & Dominate: The Berlin Wall and Other Brutal Barriers between Us & Them” (WSM101P), the seminar also explores the role of physical and invisible boundaries around the world and in everyday settings.

More on the Westminster Seminar Program

“It has been honor and absolute pleasure to be in class today.  I enjoyed hearing a real life story from someone who spent some time in Berlin. The [course textbook] has done enough to clarify how the situation of Berlin was from early 1960s till 1989, but things make much more sense when you hear [from] someone who was part of the American Army…. Overall, it was amazing to be in class.”

“I really enjoyed hearing President Forsythe talk today! I felt as though I was hearing a different side of President Forsythe that I have never heard of before. It was a treat hearing him talking about his memories from Berlin and discuss more personal things that our book does not.”

“I found the president’s presentation very enlightening in that it gave us a better picture of what was really going on in Berlin. The personal stories helped with cementing vague pictures I had in my head about all that was happening (in the book) and I felt like I understood a bit more on how exactly the Cold War worked. It was also an interesting contrast to hear [him] tell of the freedoms and normalcy of an American soldier (ranked one at that) when most of what we have been learning about is restrictions and barriers.  It put a nice perspective for the whole topic for our seminar class.”

“President Forsythe’s visit was really interesting. It was awesome to actually get the perspective of someone who was in Berlin during the time of the Wall and who had to deal with it every day. I would love to hear more!”

“Today President Forsythe’s speech was incredibly informative and riveting. His first-hand experiences at the Wall gave us a very interesting perspective on the Wall that we haven’t had the pleasure of hearing. It was fantastic listening to this history from someone who experienced it first-hand.” 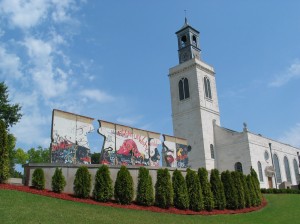