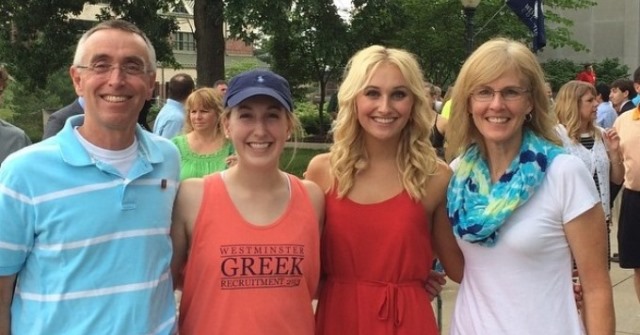 Congratulations to Megan McCaul ’16 on her early acceptance to medical school!  Megan is pictured above, second from left, with her father Jim ’78, sister Shannon ’18, and mother Debbie.

As a proud father, I want to let you know that Megan this weekend became the first Westminster student ever to be selected for a Bryant Scholarship at the University of Missouri Medical School. Basically, she has been selected for early admission to medical school in the Fall of 2016.

A little history you might find interesting. A few years ago, Dr. Amspoker worked determinedly to get Westminster added to the short list of schools in Missouri from which Bryant scholars can be selected. The powers at the state schools were successful in lobbying to restrict access to only six public schools in the state. When Megan started as a freshmen at Westminster, I took up the baton and talked with the Dean of the medical school and those in charge of the Bryant program. I reinforced the quality aspects of Westminster academics including the cadaver lab and encourage them to reconsider Westminster and our well rounded leadership focused applicants. After weeks of lobbying, Mike and I again met with frustration. Then the unexpected happened. A new Dean at the medical school was going through the “in-basket” of things left over from the prior administration. He reviewed Westminster’s arguments for inclusion with a critical eye and added Westminster to the short list of Missouri schools from which Bryant scholars can matriculate.

Mike is a quiet man who does not seek out accolades. He deserves our recognition for making this a success story for Westminster and Megan.