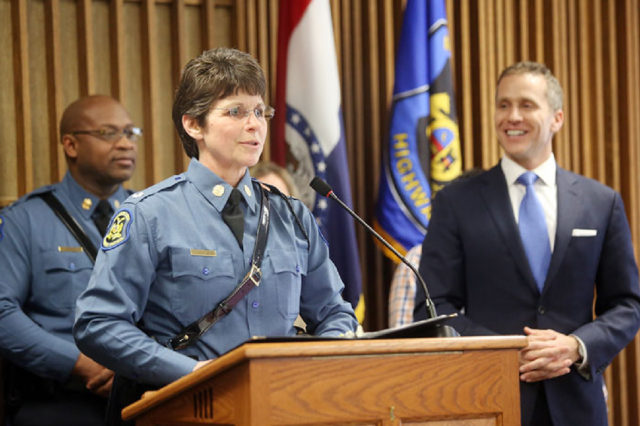 The first woman in history to lead the Missouri State Highway Patrol will speak Wed., March 29 at noon in the Coulter Science Center Lecture Hall.

Colonel Sandra K. Karsten, recently appointed to her new post by Missouri Governor Eric Greitens, will speak about her career path as a female in a predominantly male profession.

Lunch from Jalisco’s Restaurant will be served at the lecture, which is being sponsored by the Remley Women’s Center and the Westminster Office of Student Life.

“We are very honored to host Colonel Karsten at Westminster College and celebrate her achievements with the Missouri State Highway Patrol,” says Dr. Kasi Lacey, Associate Dean of Student Life. “It will be very powerful for our female students and community members to hear about her journey in such a challenging field.”

The first female officer to be promoted to the rank of lieutenant, captain, major, lieutenant colonel and colonel in the Patrol’s 84-year history, Colonel Karsten is now in command of the entire organization, which employs almost 2,400 people, including 1,221 officers.

In her role as Colonel, she oversees the Patrol’s Professional Standards and Public Information and Education divisions and its legal counsel.

“Sandy was 21 years old and right out of college when I met her, and from day one I could see she was a quality person…that she came from a safe background and strong heritage,” says Scott Pauley, who was her field-training officer and retired after 33 years with the Patrol. “I believe she is one of the finest female law enforcement officers anywhere in the country.”

Colonel Karsten decided to seek a career with the Highway Patrol when she was 17, attending Putnam County High School in Unionville. She enrolled in Patrol Academy in September, 1985, after earning a bachelor of science degree in criminal justice at Northeast Missouri State University in Kirksville. She also holds a master’s degree in public administration from the University of Missouri.

She spent nine years as a trooper with Troop F in Callaway County before being promoted to sergeant. After serving as Assistant Zone Commander for Troop F and then Zone Commander in Audrain County, she was transferred to the Patrol’s general headquarters in 1996 and assigned to the Field Operations Bureau. She worked for ten years as the Director of the Human Resources Division and then became Designated Commander of the Technical Services Bureau.

Colonel Karsten lives in Wardsville with her husband Tim, who is the Blair Oaks High School industrial arts teacher and wrestling coach.