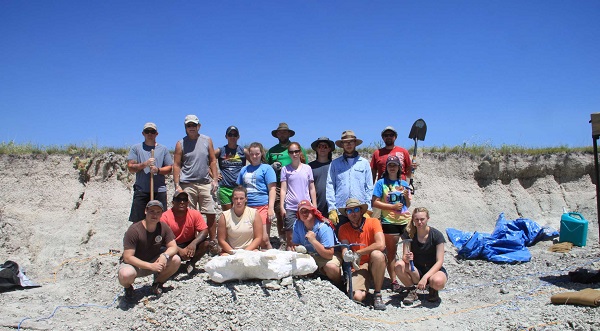 Along a meandering stream on a wide-open plain, a herd of massive, rhinocerous-like creatures bend down to drink. The size of African elephants and with dual, side-by-side horns protruding from their snouts, the brontotheres roam through a landscape that won’t see human beings for tens of millions of years.

In the present day, college students bend over that same stream bed, long since dried, and brush away dust and grit to expose the face of one of these prehistoric animals. Excitement builds as they realize they’ve found the skull of a brontothere. 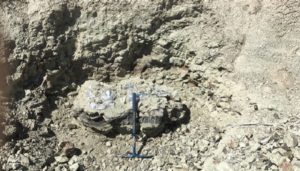 For the fourth consecutive year, Westminster College’s Dr. David Schmidt, Associate Professor of Environmental Science and Geology, has led Westminster students on a summer travel study experience to Badlands National Park in South Dakota. Each year, the students who take part in the trip have the opportunity to apply knowledge they’ve obtained in the classroom and gain hands-on experience in the collection and preservation of fossils. Digging in one of the world’s richest fossil beds, the summer 2016 expedition made the history-in-the-making discovery of the brontothere skull.

Dr. Schmidt says, “When we began excavation in the summer of 2016, I recognized an unusual part of bone sticking out of the rock. At the time, I thought it was either part of the skull or pelvic girdle. When students began excavating around that unusual part of bone sticking out, they eventually started to uncover large teeth. We knew at that moment it was a skull, and based on the shape and size of the teeth, we determined it was a brontothere.”

The fossil-rich ancient stream channel where the brontothere skull lay was initially discovered by students on the 2015 trip, but the fossils were several meters outside of the team’s permitted collecting area. Dr. Schmidt had to obtain a permit so that students could return to the area and recover the fossils this year. 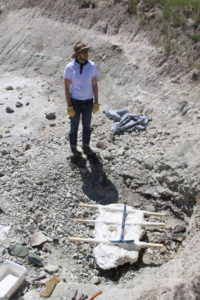 After the discovery this summer, students used a plaster jacket to protect the specimen during transport back to Westminster. Field jacketing is a standard practice in paleontology. It involves encasing the fossil in a protective shell of plaster and burlap before removing it from the dig site. After the fossil arrives in the lab and the jacket has been carefully removed, small tools are used to brush and chip away the earth and rock in which the fossil is embedded. Once the fossilized remains are free, they can be prepared for study or display.

Brontotheres are well documented in the North American fossil record, and over the past century and a half, many of their skeletons have been found by paleontologists. Dr. Schmidt explains that most brontothere recoveries took place in the late 1800s and early 1900s, so to find one nowadays is less common. Renewed interest in brothotheres in recent years also makes this a significant discovery, as scientists are revisiting the species to learn more about these prehistoric mammals. “Finding a skull is important because this is where the most taxonomic information is preserved. If our skull is in good enough condition, we may be able to identify ours to the species level, or it may be an entirely new species altogether.” he says. 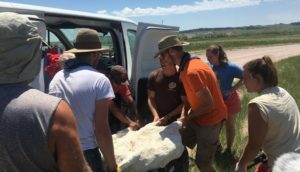 The recovery of the skull is exciting, says Dr. Schmidt, because it is the first time that Westminster students have taken part in a discovery of this magnitude.

“I think being a part of something so unique in Westminster history is very special. Our plan is to prepare many of the specimens we have found in the badlands and try to put them on display,” says Schmidt, “so those students that participated in finding this specimen can come back years later when visiting Westminster and feel proud of their accomplishment.”

This find is also notable because it adds dimension to brontothere research already being conducted by Westminster students. Last year, Taylor Howard (then a junior at Westminster) began looking at a cross-section of a fossilized brontothere limb bone to try and determine the age and growth rate of brontotheres. Dr. Schmidt hopes that other students will continue Howard’s work this school year.

“To our knowledge, no one has conducted studies about brontothere life histories using bone histology, so it is very exciting that this skull might be able to contribute more information,” says Schmidt. 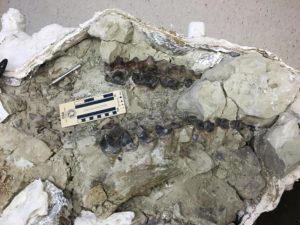 preparation of our specimens…As long as these specimens are being worked on, they can stay here on loan.” If no one works on the fossils, they must be sent to Llano Estacado Museum in west Texas to be curated.

Dr. Schmidt is doing the work himself to ensure that Westminster can keep and display the specimens collected by Westminster students. “ I have had two students, Kristen Hirst ’17, and Jessica Kinkade ’17, express interest in preparing and doing research [on the skull], but one is already involved in research with two fossilized entelodont jaws, and the other has a very busy academic schedule.” Both students plan to join Dr. Schmidt in this project at their earliest opportunity.

Looking forward, “I’m hoping we’ll have the skull entirely prepared by the end of this year,” explains Schmidt. “If this is achieved, the following school year will be devoted to determining the taxa [taxonomical information such as species, family, and class], with a formal presentation at the end of the spring semester, 2018.” Dr. Schmidt welcomes anyone interested in this exciting find to visit the Environmental Science lab and see the progress being made on the skull.