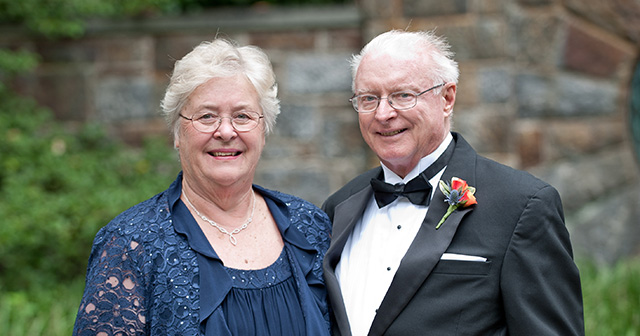 Those Westminster College students wanting to attend medical school will benefit greatly from the new Dr. William and Judith Blank Pre-Med Scholarship, but the motivation to establish such a gift started when Dr. Blank first attended Westminster.

Dr. Blank, ’64, a Sigma Chi originally from Belleville, IL, and now from La Crosse, WI, knew he wanted to be a doctor at the age of 12 because he “thought it would be great to have a good job where you could help people.”  However, he knew early on that funding a college education would be a struggle for his parents so he worked tirelessly at school with the goal of being awarded a scholarship.

As he began looking at colleges, his track coach whose son Charles Kneedler, ’63, was going to Westminster told Dr. Blank that the school had an excellent pre-med program.  Westminster Director of Admissions Clarence Keele, confirmed that fact on a visit to Dr. Blank’s home where he told the Blank family that no graduate from Dr. Cameron Day’s pre-med program had ever failed to get into medical school.

What many people did not realize was how directly Dr. Day marked his graduates.  During spring break, he would get in his car and visit his friends who were deans of admission at medical schools, networking with them and telling them about his students.

“When I graduated from Westminster, I was well aware of how fortunate I had been thanks to scholarship help and how good Westminster had been to me,” says Dr. Blank.  “I was already thinking of how I could pay it back.  I have often thought, where would I be, had I not gone to Westminster.”

In medical school, Dr. Blank found he was just as prepared as many of his classmates who came from Ivy League schools.  While these students might have studied under a professor who wrote the chemistry textbook, they had never spoken to him or her.  At Westminster Dr. Blank knew Professor Robert McCreight, Chair of the Chemistry Department well and had even been to his house.  “If I had a question, he was there to answer it,” says Dr. Blank.  “That was true of all my professors and is an advantage of small schools.”

So today Dr. William Blank and his wife Judith are committed to seeing that Westminster students receive the same financial assistance and excellent preparation that Dr. Blank received.  Their $450,000 endowed scholarship fund will go a long way in making that possible.

“The country will always need good doctors, and the cost of medical school is high,” says Dr. Blank.  “I would like other students to have the same opportunity that I did and to thank the College.  I wish I could do more.  That is why Judy and I established the scholarship.  We both believe in education and the future.”

Because Bill and Judy Blank believe not only in the future of education but in the future of Westminster, they have provided students who do not have the means to pursue a medical career the opportunity to fulfill their dreams of being a doctor.