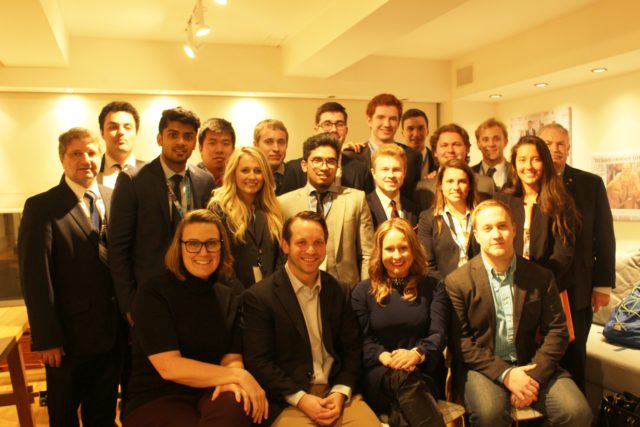 On Thursday night, February 15, the BBIC students joined Westminster alumni for drinks and a taco bar at the New York office of the National Down Syndrome Society (NDSS), hosted by the organization’s President and CEO, Sara Weir ’04 KKΓ, of Washington D.C.

Sara welcomed the group into a cozy office, and as Blake Harris ’18 ΔΤΔ, from Oklahoma City, OK said: “The small space we were in created much more discussion with alumni and current students and had a ‘Westminster feel’ to it.” Blake was quite impressed with what he learned from the brief program about NDSS and says he is still wearing the NDSS hat and bracelet they were given.

Clara Baldwin ’19 KKΓ, from Columbia, MO felt the same way. “I felt the group automatically connected with alumni, and it created a presence of home, even though we were hundreds of miles away from Fulton.”

The program was hosted by Sara and NDSS Communication Director and consultant Josh Harlow ’06, of Oklahoma City, OK and NDSS Chief of Staff Kandi Packard about the mission and work of NDSS. Sara and Josh were joined by a third Westminster alumnus, Caleb Herr ’17, Alexandria, VA, who is the Digital Media Technical Specialist for NDSS. The three Westminster alumni discussed their connection to NDSS and how networking and reliance on fellow alumni were essential to post-graduate career development.

“The relationship that NDSS has and the connections between Sara, Josh Harlow, and myself is a testament to how Westminster connections can work to help each other,” says Herr. “I got the opportunity to meet Sara at a Westminster event on campus and out of that experience, I got a job!” 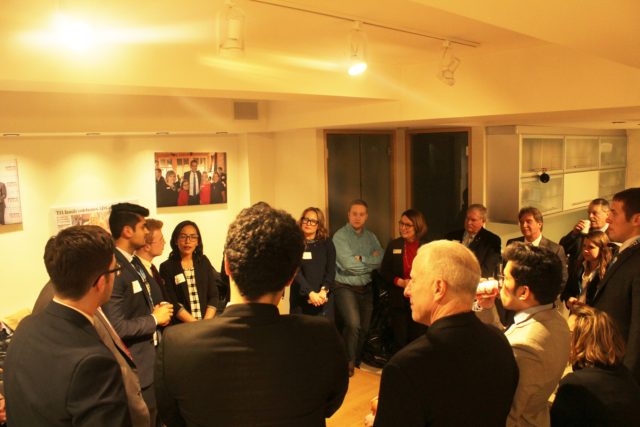 One of the BBIC students, Taylor Howard ’18 KAѲ of Mokane, MO, who considers herself a shy person, was very glad Caleb was there to meet the group since she knew him. “Four years ago when I interviewed for my Westminster scholarship, I had a hard time forcing myself to talk,” she says. “I was better at answering questions ‘yes’ or ‘no’ rather than elaborating on my views and opinions. Through this alumni event, I not only made connections with other Westminster family, but I also let down my wall of shyness and learned how to mingle. From that event, I feel confident that I can go into any situation and talk about myself and my views.”

Two BBIC students, Clara Baldwin ’19 KKΓ, of Columbia, MO and Riley Zack ’19 ΦΔΘ, Fenton, MO both had extraordinary conversations with Liz Young, Global Head of Marketing at JP Morgan and Chase Co., who was there with her husband, Matt ’90 ΒΘΠ.

At one point in the conversation, Riley told Liz that his dream was to work at the National Hockey League (NHL), and Liz said she knew NHL Commissioner Gary Bettman. She then asked Riley for his resume to send to Gary, which Riley intends to send her next week. “I knew we had a great alumni base at Westminster,” he said. “That is how I got my internship at Wells Fargo for this coming summer. But this blew my mind. That moment made the biggest impact on my trip because it might send my career in a completely different direction.”

Clara had a similar experience with Liz.

“I asked Liz about her company and how she began,” says Clara. “She told me she started as a fashion and design major and couldn’t find a paid internship with fashion companies. She eventually grew an interest in marketing and ended up at JP Morgan running sponsored events in close contact with ambassadors and celebrities. She told me when we toured JP Morgan the next day to contact her so we could talk about job opportunities.” During lunch the next day, Clara stopped by Liz’s office, and she offered Clara a position on her team beginning her transition to senior year. Clara plans to stay in contact with Liz throughout next year and hopefully start training in New York next summer.

Jacob Money ’19 ΣΑΕ, from St. James, MO found the evening to be a “great time” “full of opportunities for connections” and reconnected with another SAE alumnus that he had met at the President’s Dinner last year.

Chanda Thapa ’19 ΒΘΠ, from Kathmandu, Nepal, thought the reception was “definitely one of the highlights of the trip.” He said, “The alumni’s advice and assurance of support was a morale booster.”

The feelings were mutual for those hosting the evening. “All of the students were very professional and really interested in becoming engaged and involved with Westminster alumni,” says Herr. “From my perspective as a recent graduate, it was a great experience because it allowed me to share some of my insights with current students as well as learn more about them. There were a lot of great conversations going on that really reflected the desire that Westminster students have to make the most of their college.”

“We are so grateful to Sara Weir and Josh Harlow for their generosity hosting this very special evening,” says Kelly Dopman, Vice President for Institutional Advancement. “Their abiding commitment to Westminster College is truly an inspiration to alumni and students alike.”

Westminster alumni at this event included: 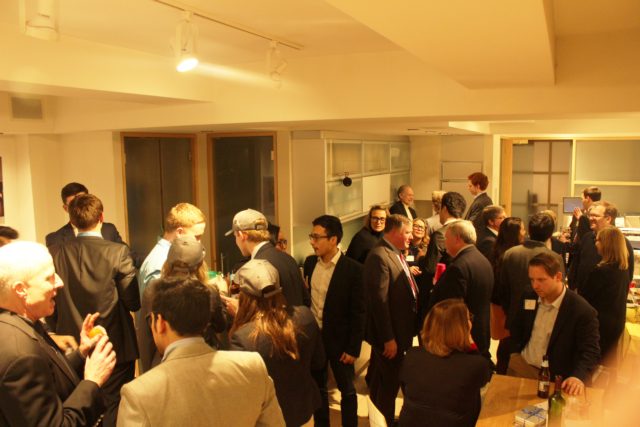