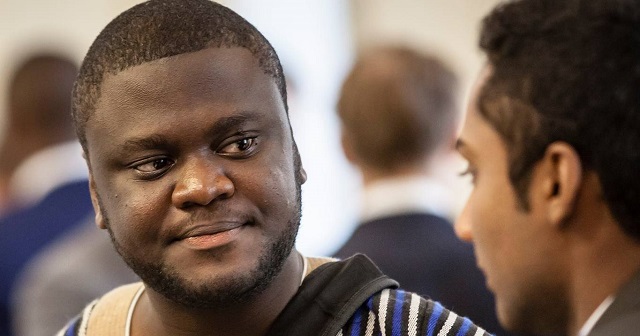 Technology entrepreneur and Westminster alum Gregory Rockson ’12 is out to change the world, one medication at a time. Through his company Mutti mPharma, a venture-backed startup and pharmacy benefits manager based in Ghana, Rockson and his team of medical professionals, project managers and programmers make prescription drugs in emerging markets more accessible and affordable. For more than three years, they’ve been working with employers, health insurers and drug companies to deliver high-quality medications to underserved populations.

“By 2030, 46 percent of all deaths in Sub-Saharan Africa will be as a result of non-communicable diseases,” Rockson says. “With rising drug prices, there is a need for a company like mPharma to set in to reduce the financial impact on patients.”

It’s not surprising that Rockson, who grew up in Ghana, works so closely with the medical field. Although he graduated from Westminster with a degree in political science, he started out pre-med.

“I always knew that I wanted to build my career and future in Africa…” he says. “I felt there was the need to rethink new business models for health care delivery in Africa. At the end of the day, to improve care, we need to understand how to finance patient treatments. I am fascinated by creating new financial models for patient care.”

And that’s exactly what mPharma is doing — and the industry is taking notice. In October, mPharma was named among the six Innovation Challenge in Africa award winners by Internet.org, a Facebook-led initiative that aims to improve connectivity around the world by bringing affordable Internet access to less-developed countries. The challenge called for ideas, apps, websites or online services that provided real value to Africa in either education or empowerment. mPharma won a $50,000 Impact Award in the economic empowerment category for its drug affordability service enabling patients greater access to medications through a flexible micro-payment system.

“It is great to be recognized by Facebook as it gives us credibility to continue with the work we started,” Rockson says of the award.

In addition to earning his Bachelor of Science in political science and government from Westminster, Rockson served on the Callaway County United Way Board before co-founding mPharma in 2013. He was a Rotary Ambassadorial Scholar at the University of Copenhagen; a PPIA Fellow at Princeton University; founder of Six Days of Peace; and co-founder of Storebror StorSoster, an after-school mentorship program for refugee children. In 2013, his experience in health care, technology, financial services and international relations earned him a spot on the Top 99 Young Foreign Policy Leaders under the Age of 33 by Young Professionals in Foreign Policy.

With work and study that has taken him around the globe, Rockson says it was the diversity at Westminster that provided a glimpse into the world he’d encounter post-graduation.

“Westminster challenged me to see the world not as a monolithic entity but rather a collection of people with different ideas,” he says.

And there’s one professor whose influence stood out most.

“Dr. Carolyn Perry had the single most important influence in my life so far,” Rockson says. “She helped me become who I am today by just believing in me and giving me the opportunities to put my skills to work.”

As Westminster continues shaping the next generation of leaders and world-changers, Rockson continues blazing his own path and working with his mPharma team to create solutions to real-world problems. Currently, mPharma’s services target three main chronic conditions that put patients in need of medication: diabetes, hypertension and cardiovascular disease. As the company continues to grow, however, the list of conditions and medications will likely expand, as will their reach.

“We want to become the largest dispenser of chronic drugs for patients in Africa,” Rockson says. “We will accomplish this by offering the lowest drug prices and health benefit plans for patients across the continent.”

Sarah Rummel Backer is a Media and Content Strategist at Westminster College in Fulton, MO. A 1992 graduate of the College, Sarah has more than 20 years of experience in marketing and strategic communication in the areas of higher education, medicine, agriculture, and the private business sector.